You cannot not fall in love with Babar's cover drive! 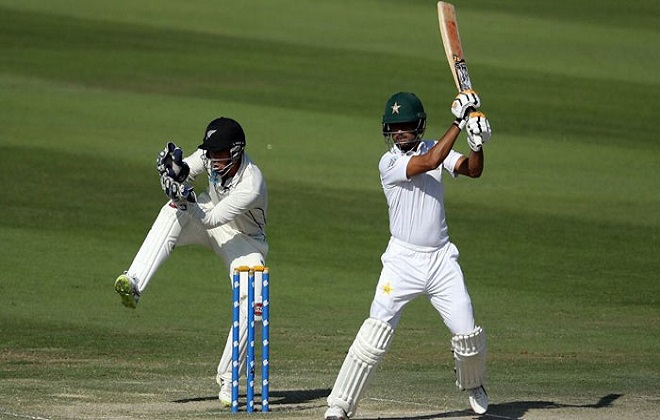 14 wickets fell in Christchurch for somewhere around 250 runs. The total was a bit higher at Centurion but 15 wickets fell. In contrast, 2 wickets fell for 215 runs in Melbourne. However, if you see how these matches are being covered, it would seem that Melbourne was the best advert for the game of cricket. Experts, writers, and audiences who had so long banished UAE cricket from their memory for being boring, were now telling us how this took skill and endurance from the batsmen. A good search with the time filter of 24 hours for Babar Azam show one article and a bunch of taken down Youtube links. Had it been a match involving Big 3, newspaper & wordpress columns would have been filled in dozens looking at this phenomenal innings by one of the World’s top batsman.

And what an innings it was. Coming after yet another top order failure, he would have been under heaps of pressure. 62-4 could easily have been a 100 all out. But Babar stood firm, at least initially. On a wicket, where balls were either jumping off a length or skidding through, Babar played with utmost ease. Initially biding his time, his 1st boundary came of the 26 ball. It was a short, wide ball and Babar took full toll. A 144 kph, Rabada rocket was on driven with such ease it seemed like it was a slower one. We have become accustomed to such balls being bunted out to the bowler. With the full face of the bat, Babar pushed it to the boundary.

Playing in those slow low wickets, Pakistani batsmen have almost given up the thought of pulling the ball. Babar is an exception, following up that on drive with a pull short. It wasn’t his most authoritative stroke but it showed intent. Another short one that stood up, was squared through cover region. Another short one from the fastest bowler on the day, Olivier was dismissed from its presence. It was just sublime timing with Babar getting in position early and swirling with the shot. His boundary came with an edge as the pitch played a trick. A short of length behaved like it was the UAE, and Babar edged it for four, with soft hands.

It if that good, what followed was to be cherished, and feared at the same time by Pakistani fans. Two cover drives of the all-conquering Dale Steyn were just so delicious, you could watch them a million times over and not get bored of it. On both occasions, the out swingers that have made Steyn the destroyer he is, was simply told to go to the cover boundary is the most elegant manner.

A visibly agitated Steyn gave Babar two wide ones and over pitched in between. The cuts and the on drive gave Babar another 12 runs. Even Steyn, reverted to be being a mere fast bowler bowled a bouncer, which dispatched towards mid-off. It was batting at its finest. Another on drive, was termed as Master Class by Mark Nicholas. Another cover drive, was played just to remind us that he has the 360 game. Another boundary towards 3rd men followed. This one clearly intended to make Steyn angrier. It was like he absorbed all the energy building up in Steyn and used it for his advantage. He was attacked out of the attack. Something that is as rare as innings of this quality from a Pakistani batsman.

Soon, the entertainment ended. It was so much exhilarating while it lasted. We had forgotten how poor the resting of the batting line up was. It was a day to cherish the brilliance of a Pakistani batsman. That is a line we don’t say or write too often. It may have not gotten too much attention from the wider world. However, for a Pakistan fan, this was a welcome sight. It brings hope for the test match and beyond, elation of having a World Class batsman in their line up and fear of losing him to loss of form, discipline or any innocuous reason. Multiple times bitten, very very shy!

But for the day, let’s just ignore our collective Thanatophobia and enjoy Babar Azam’s indubitable quality.