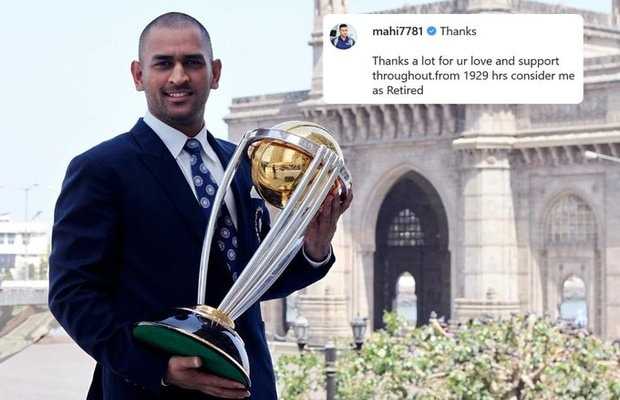 Cricket world pays tribute to the cricket great MS Dhoni who announced his retirement from international cricket a day ago. He captained India in all three formats of cricket.

The 39-year-old made his decision public on Saturday via Instagram post, saying: “Thanks. Thanks a lot for your love and support throughout. From 1929 hrs today, consider me as retired.”

As captain, he won three ICC trophies. He led India to the inaugural Twenty20 World Cup title in 2007 and he repeated the feat at the 50-overs World Cup on home soil in 2011. In 2013, he lifted the ICC Champions Trophy in England.

Following his retirement announcement #, MSDhoni became the number one trend worldwide on Twitter.

Messages and tributes for MS Dhoni have flooded Twitter timeline:

tweet
Share on FacebookShare on TwitterShare on PinterestShare on Reddit
Saman SiddiquiAugust 16, 2020
the authorSaman Siddiqui
Saman Siddiqui, A freelance journalist with a Master’s Degree in Mass Communication and MS in Peace and Conflict Studies. Associated with the media industry since 2006. Experience in various capacities including Program Host, Researcher, News Producer, Documentary Making, Voice Over, Content Writing Copy Editing, and Blogging, and currently associated with OyeYeah since 2018, working as an Editor.
All posts bySaman Siddiqui