Djokovic was scheduled to play his first-round Australian Open match against world No. 78 Miomir Kecmanovic on Monday night. 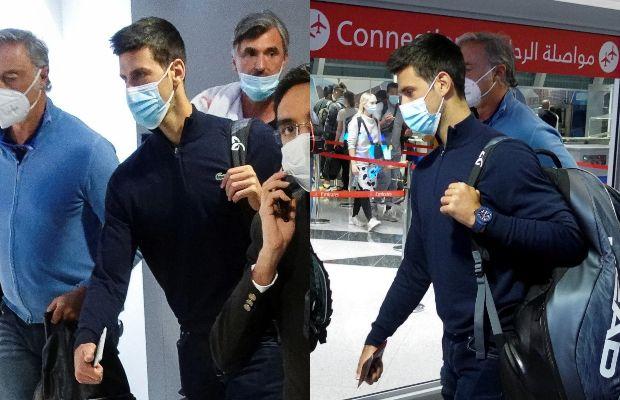 Djokovic has arrived in Dubai on Monday after being deported from Australia!

The world number one flew out of Melbourne late on Sunday after the Federal Court upheld a government decision to cancel his visa.

The 34-year-old landed in Dubai on Monday morning and was spotted taking a selfie with a fan at the airport. Before his departure, Serb tennis star Djokovic said he was “extremely disappointed” by the Australian court’s ruling, but said he respected the decision.

“I cannot stay in Australia and participate in the Australian Open,” he said in a statement.

“I am uncomfortable that the focus of the past weeks has been on me and I hope that we can all now focus on the game and tournament I love,” he added.

Novak Djokovic, the world’s No. 1-ranked men’s tennis player  was scheduled to play his first-round Australian Open match against world No. 78 Miomir Kecmanovic on Monday night.

Djokovic’s Australian visa was canceled a second time on Friday

tweet
Share on FacebookShare on TwitterShare on PinterestShare on Reddit
Saman SiddiquiJanuary 17, 2022
the authorSaman Siddiqui
Saman Siddiqui, A freelance journalist with a Master’s Degree in Mass Communication and MS in Peace and Conflict Studies. Associated with the media industry since 2006. Experience in various capacities including Program Host, Researcher, News Producer, Documentary Making, Voice Over, Content Writing Copy Editing, and Blogging, and currently associated with OyeYeah since 2018, working as an Editor.
All posts bySaman Siddiqui