Djokovic is now just the second man in history to win at least 9 titles at any Grand Slam event. 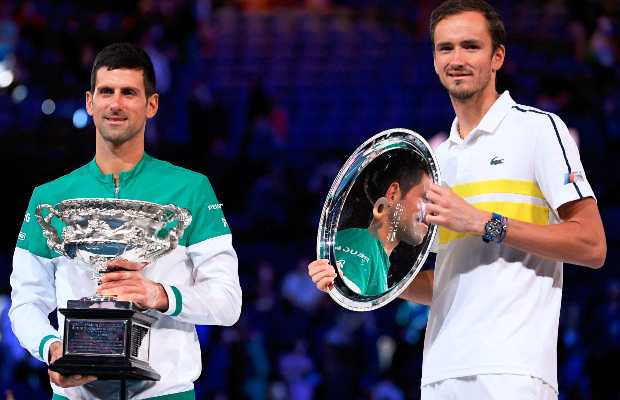 The men’s final at Melbourne Park saw a stunning opening set from both men, but the Serb world No. 1 was able to put his foot down and raced to a 7-5 6-2 6-2 win in less than two hours.

For top-seeded Novak Djokovic, 33, this is his 18th Grand Slam singles title two behind Federer and Nadal.

Djokovic is now just the second man in history to win at least 9 titles at any Grand Slam event.

“On the court, Daniil is one of the toughest players I have ever faced in my life. It’s only a matter of time before you hold a Grand Slam trophy,” said Djokovic speaking after winning the championship.

“If you can wait a few more years, I’d appreciate it. It’s amazing that he has put together a 20-match winning streak over the past few months.

tweet
Share on FacebookShare on TwitterShare on PinterestShare on Reddit
Saman SiddiquiFebruary 21, 2021
the authorSaman Siddiqui
Saman Siddiqui, A freelance journalist with a Master’s Degree in Mass Communication and MS in Peace and Conflict Studies. Associated with the media industry since 2006. Experience in various capacities including Program Host, Researcher, News Producer, Documentary Making, Voice Over, Content Writing Copy Editing, and Blogging, and currently associated with OyeYeah since 2018, working as an Editor.
All posts bySaman Siddiqui