Pakistan failed to put a fight with the bat 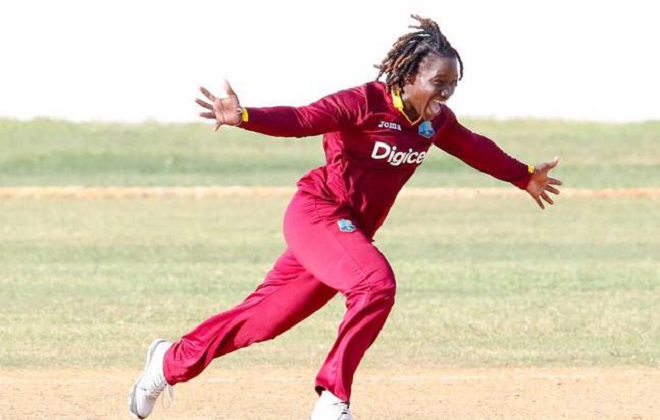 Deandra Dottin continued her top form as she dominated Pakistan with bat and ball, in the 1st ODI of the series played at Dubai International Airport. The opener was unlucky not reach her hundred scoring 96, and then came back to pick up 3 for 14 with the ball. Pakistan couldn’t put up any fight as they were bowled out for 70, losing by 146 runs.

West Indies were off to a slow start as opener Kycia Knight faced 18 balls, but failed to open her account and was bowled by Sana Mir. Dottin, along side Stafanie Taylor, put on 146 runs for the 2nd wicket partnership. Taylor scored a 97 ball 58 before being caught of Kainat Imtiaz.

Imitiaz, also got Dottin eventually but the damage was already done. With eight fours and two sixes, Dottin scored 96 of 139. Shermaine Campbelle and Chinelle Henry scored 26 and 18 respectively to take the Windies to 217.  Kainat Imitiaz picked up 3 wickets.

Pakistan were never really in the chase, getting bowled out for 70 inside 30 overs. Nahida Khan top scored with 47 ball 23. Stand in captain Javeria Khan also scored 21. None of the other players could reach double figures and Pakistan lost 9 wickets for 24 runs. Dottin picked up 3 wickets for just 14 runs. Afy Fletcher, was also the chief destroyer for West Indies, picking up three for 17 runs.

For West Indies it was a comprehensive win. While Pakistan will have to get themselves back up. They might have to do it without their main batsman and captain Bismah Maroof whose bad luck with injuries continued as she took a hit on her jaw before today’s match and sat out. Javeria Khan, captained in her absence. Aimen Anwar also suffered a hamstring injury in the West Indian innings and couldn’t come out to bat.

The 2nd ODI will be played on 9th February.