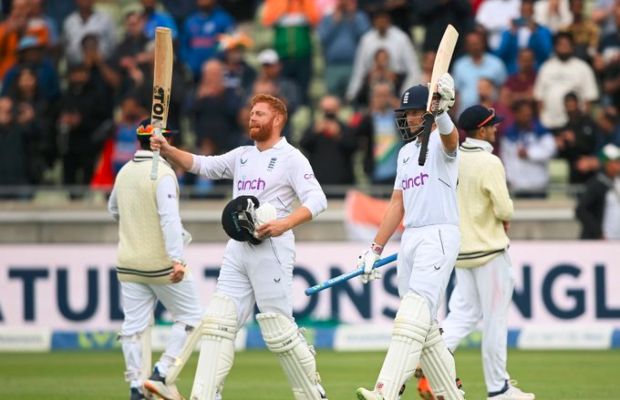 Cricket fans react as England upstage India in the 5th Test on Tuesday.

Root and Bairstow showed the kind of sustained aggression which is quickly becoming the hallmark partnership of the England test team.
It’s the first time that India has lost a Test when defending a 350+ target!

Day 4 kicked off as Cheteshwar Pujara and Rishabh Pant had a solid start, as India aimed to extend their lead.

There was a more aggressive intent from Pujara, but an attempted flashy cut against Stuart Broad cost him his wicket at 66 while Shreyas Iyer was sent back to the dressing room against the short-ball ploy, with Matthew Potts getting his scalp for 19

Pant who managed to cross his half-century, attempted a reverse sweep against Jack Leach but could not hit the connection, and was sent back at 57.

A procession then followed, as the remainder of the Indian batters failed to contribute much to the cause.

Skipper Ben Stokes would clean up the final three wickets after lunch, as the visiting side was bowled out for 245.

The target for England to chase down was 278.

England openers started aggressively to chase the target, some thought Day 4 will bring the result. But it was meant for day five for the host England to pull off a historic chase at Edgbaston.

Chasing 378 for victory, the English side went to bat on the final day needing 119 runs with seven wickets in hand.
Jonny Bairstow had the best time of his career so far on the crease by hitting his second century of the match, his fourth in his last five Test innings, and his sixth of 2022!
The England captain was on fire in the second innings.

Joe Root (76*) and Jonny Bairstow (72*) established a brilliant partnership to put the hosts in charge during their run chase of 378.

And the rest is history now. Here is how cricket fans react to today’s England win:

And the 5 match test series end in a 2-2 Draw !#ENGvsIND pic.twitter.com/Oa3yIVogmY

No praise high enough for these two! @root66 is the best test batter right now, but the way @jbairstow21 rose to the challenge in both inns was superb. You just got to doff your hat and say well played 👏🏽 #ENGvIND pic.twitter.com/T6sX0NBKhK

Teammates dragging Kohli out of the ground when Bairstow enters. #ENGvsIND pic.twitter.com/VRHlGS6TzY

Some cricket fans were disappointed that England didn’t try and chase it down yesterday. But who knew Joe Root and Jonny Bairstow would run riot on Day 4!

England could have chased 600 the way they're batting#ENGvsIND

This is absolutely ridiculous run chase by England. This Brendon McCullum's approach is working big time for them. Take a bow, Root, Stokes and Bairstow. 💯👏👏 #ENGvsIND pic.twitter.com/6SkBNphLDP