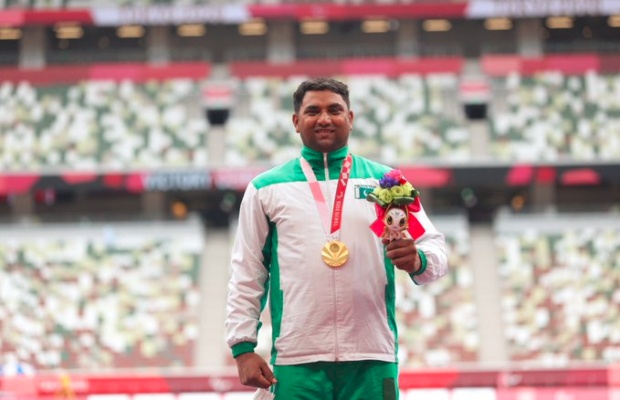 History has been made for Pakistan as Haider Ali wins a gold medal in the discus throw competition with a throw of 55.26m, a personal best.

His throw of 55.26m is a personal best and almost three metres longer than second place! #Tokyo2020 #Paralympics #ParaAthletics pic.twitter.com/SD3rO1qlaF

He achieved a 55.26 metre throw at his fifth attempt out of a total of six to score the best distance — almost 3m longer than Ukraine’s Mykola Zhabnyak who scored 52.43m to come in second place.

“This gold will be very important for Para sport in my country. They will see what can be achieved through hard work and to be able to compete internationally for Pakistan,” said Haider Ali.

“I hope to be a role model for other people that have a disability that doesn’t compete in sport to take part in Para sport,” the gold medalist added.

"I hope to be a role model for other people that have a disability that don’t compete in sport to take part in Para sport." – Haider Ali #PAK #ParaAthletics #Tokyo2020 #Paralympics pic.twitter.com/rnCrRmMals

tweet
Share on FacebookShare on TwitterShare on PinterestShare on Reddit
Saman SiddiquiSeptember 3, 2021
the authorSaman Siddiqui
Saman Siddiqui, A freelance journalist with a Master’s Degree in Mass Communication and MS in Peace and Conflict Studies. Associated with the media industry since 2006. Experience in various capacities including Program Host, Researcher, News Producer, Documentary Making, Voice Over, Content Writing Copy Editing, and Blogging, and currently associated with OyeYeah since 2018, working as an Editor.
All posts bySaman Siddiqui