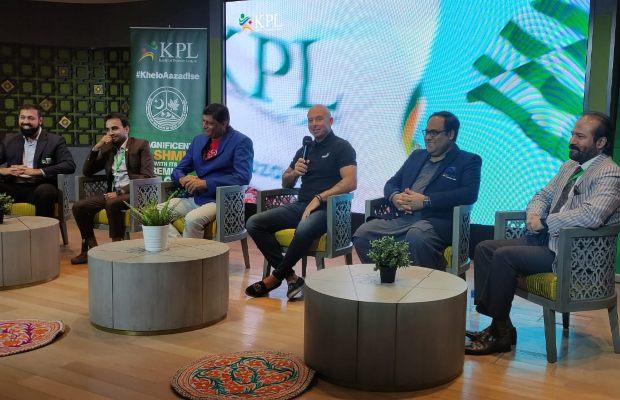 The second day of the Kashmir Premier League showcase at Expo 2020 was another extravaganza for the people visiting Kashmir Gallery at Pakistan Pavilion, on Saturday, 26th March 2022. Honorable guests and sports legends from Pakistan and Azad Jammu & Kashmir added value to the ongoing events.

Ch. Shahzad Akhtar (CEO of KPL) opened the day with an introductory speech about the Kashmir Premier League Season 2. He said that this year we are coming with a much greater and superior KPL. He further added that the addition of two more franchises has enhanced the canvas of KPL which will add more excitement and thrill to the game. Also, this addition of new franchises will uplift the increased number of talented local players from AJ&K. Above all, this season will bring more economic activity, increase social harmony, develop sports culture, and will also increase tourism in the region.

The occasion was ornamented with knowledge-intensive and gladsome programs and activities. A conference on the topic “KT20 -A feeder league by KPL was held in the moderation of Mr. Taimoor Ali Khan (COO of KPL). The session was graced by the guest of honor Herschelle Gibbs (International Cricket Player of South Africa), Mr. Mansoor Qadir Dar (Secretary of Sports & Tourism of AJ&K), Mr. Arif Malik (President of KPL), Mr. Arshad Khattak (Chairman of KPL), and Ch. Shahzad Akhtar (CEO of KPL).

Participants of the conference had a fruitful discussion on the topic of KPL including the need and initiative for this domestic league, the futuristic approach of KT20, increased opportunities for local players of AJ&K, development of sports culture in the region, eradication of local challenges, and opportunities for investors & the tourism industry. They appreciated the initiative of KT20 by KPL which is envisioned to uplift the local talent, enhance their skills, and develop them into international standard players. They wowed to make it a domestic league that will directly impact the lives of players besides enhancing the lifestyle of the people of the Kashmir region. The addressees cherished the initiative and learned about how to be a part of the KT20 league.

The spectators were very excited to attend the program “Khelo Aazadi Se” with Herschelle Gibbs as the guest of honor. The program host Zaariya Khan questioned him covering various aspects of his life, career, and about playing a significant role in KPL Season 1. Herschelle Gibbs also answered several questions asked by the audience present in the show. Afterward, the people also had live interaction with Herschelle Gibbs who gifted them with his signed bat and ball.

The visitors of the Kashmir Gallery also had a close interaction with the management of the Kashmir Premier League and the high-profile dignitaries from the Azad Jammu & Kashmir Government. The Kashmiri diaspora was very keen on learning more about KT20 and KPL. The visitors of the Kashmir Gallery expressed their love and emotions for these great initiatives of KT20 and KPL. They said that these leagues will not only provide high-energy entertainment but will also enhance the peaceful and harmonious image of Kashmir along with the magnificence of Kashmir.

The presence of a large number of media representatives increased the worth of the events held at the KPL section of Kashmir Gallery at the Pakistan Pavilion. They reported live from the venue to send a global message from the peaceful people of Magnificent Kashmir with its Premier League.