The 21-year-old shattered the hopes of India with a mesmerising spell of fast bowling. 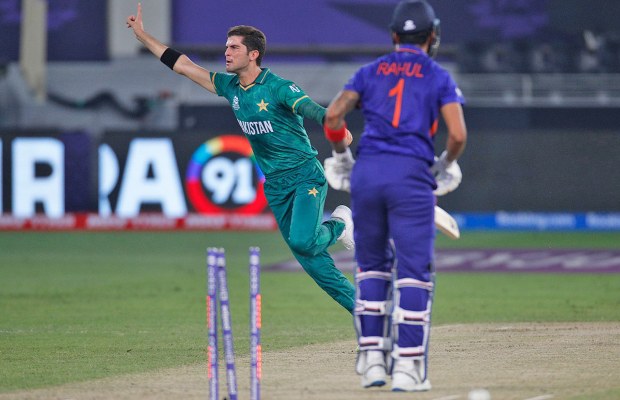 ICC announces Shaheen Afridi’s opening spell against India as ‘Play of the Tournament’.

The 21-year-old shattered the hopes of India with a mesmerising spell of fast bowling!

The International Cricket Council (ICC) on Wednesday made the official announcement while sharing glimpses of Pakistan’s fast pacer’s deadly spell against the arch-rivals in the match played on Oct. 24.

“The winner of the Play of the Tournament from the 2021 ICC Men’s #T20WorldCup is Shaheen Afridi’s blistering opening spell against India,” the ICC tweeted.

Pakistani fast pacer Shaheen Afridi was also the Player of the Match trophy for his phenomenal performance with the ball against India.

Pakistan after winning the toss put India to bat first, and the decision turned out to be the best in the green team’s favour.

Shaheen brought the early breakthrough for his team as he sent back both the openers Rohit Sharma and KL Rahul to the dressing room.

Rohit went for a duck while KL managed to score three runs only.

Pakistan hammered India by 10 wickets to register their first-ever win over their arch-rivals in the fourth match of the T20 World Cup Super-12 stage played in Dubai last month.

It was a historic day for Pakistan cricket as the boys in green excelled both with the bat and the ball.