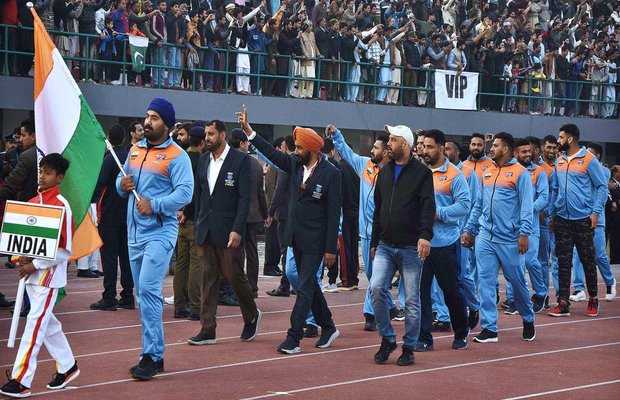 In a rather bizarre turn of events, the Indian Olympic Association (IOA) and Amateur Kabaddi Federation of India (AKFI) has disowned its team participating in the Kabaddi World Cup 2020 being held in Pakistan.

Pakistan’s Kabaddi Federation (PKF) has however refuted the baseless claims and warned against mixing politics with sports.

“The IOA has not approved and it has also not been approved by the (Kabaddi) federation so I don’t know who has gone. Whether 60 or 100 have gone, I have no idea,” said Narinder Batra, chief of Indian Olympic Association.

PKF President Chaudhry Shafay Hussain categorically denied the Indian claims and asserted that the athletes who arrived for the event through Wagah Border are all players of the Indian national team.

“The fact is that the Kabaddi World Cup is being held in Pakistan for the first time. It was only held in India before,” said President PKF while adding, “Some enemy elements are conspiring [against the event].”

On the other end, KPF secretary Rana Sarwar requested those who want the assurance to check the ranks of all participating players on the Indian national team.

Apparently, this is a case of an internal fiasco among Indian sports bodies amid the ongoing Pak-India conflict. The athletes, arriving yesterday have been the victim of internal politics, per say.

Kabaddi World Cup 2020 is an 8-day event that will be held in Lahore, Faisalabad, Kartarpur and Nankana Sahib. This is the first time Pakistan is hosting the championship which is being attended by kabaddi players from Iran, Canada, Australia, United States, Germany, Sierra Leone, and Kenya.