Kohli elected to field after winning the toss. 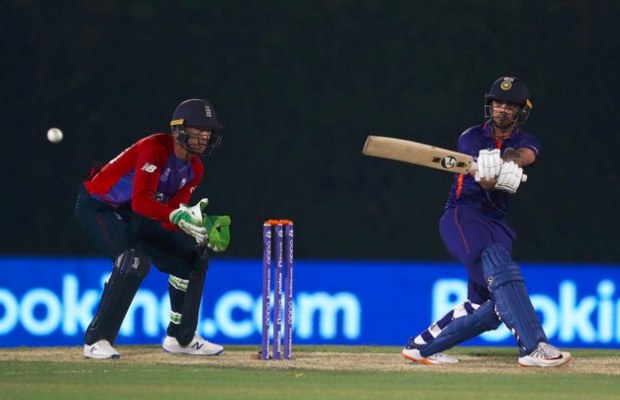 India triumphs against England by 8 wickets in the warmup match of ICC T20 world cup on Monday in Dubai.

Kohli elected to field after winning the toss.

While English side went on the crease with a shaky start.

The English side lost openers Jason Roy (17) and skipper Jos Buttler (18) by the sixth over of the Powerplay, with 47 runs on the board. 30 runs later, Dawid Malan (18) fell to spinner Rahul Chahar.

However,  a 52-run stand between Jonny Bairstow (49) and Liam Livingstone (30) gave the innings some stability before the latter was knocked over by seamer Mohammed Shami in the 15th, at 129. At the same time, the former suffered the same fate off pacer Jasprit Bumrah in the 19th, 34 runs later.

Moeen Ali (43) provided some late fireworks to allow England to post a challenging total of 188/5.

India used five of its bowlers into the attack, with Shami claiming a three-for, while off-spinner Ravichandran Ashwin was the most economical of all.

the Indian openers Rahul and Kishan got theor side a flier start , scoring 82 runs before Rahul fell to pacer Mark Wood in the ninth.

A 43-run stand resulted between Kishan and Kohli (11), as spinner Liam Livingstone got rid of the skipper in the 13th.

While Kishan had scored his half-century by this time, he retired out in the 16th over, making way for Suryakumar Yadav (8), who pacer David Willey dismissed in the 18th at 168.

While Rishabh Pant (29*) and Hardik Pandya (12*) saw out the game with six balls to spare, courtesy of some poor bowling from pacer Chris Jordan in the 19th.

England utilised seven bowlers, with Willey, Wood and Livingstone being the only wicket-takers