What a way to celebrate century and cricket fans can't stop laughing! 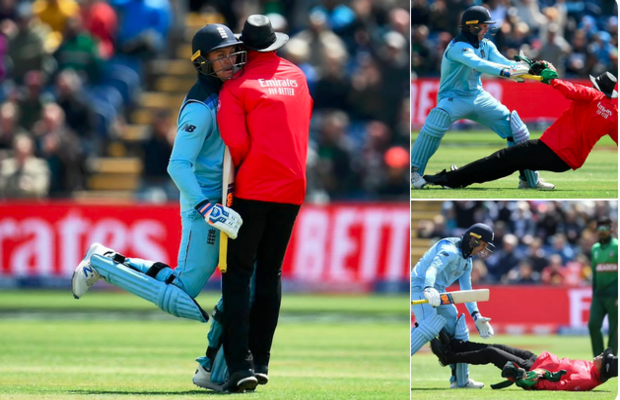 Jason Roy scored his 9th ODI hundred in England’s third match against Bangladesh at the Sophia Gardens in Cardiff on Saturday.

The celebrations for the century in just 92 balls turned into hysterical laughter as the crowd and the English dressing room got on their feet to cheer for Roy reaching his 9th ODI hundred.

The stadium was left in splits as Roy had knocked down the umpire in the process of getting 100 runs on the board.

In the 27th over of the England innings, as Mustafizur Rahman dropped the fifth ball of the over short as Roy flashed into position and pulled it in the direction of deep square leg.

While Roy and Joe Root rushed for a single, ball was misjudged by the fielder in the deep and it crossed the boundary.

Everyone in the stadium including the umpire as well as Roy had their eyes on the ball, and as Roy tried to celebrate he crashed into umpire Joel Wilson.

Later the internet was also in splits over the incident:

What a way to bring up a 💯 Jason Roy 😂😂😂😂
My fav Englishmen❤❤❤
Congrats @JasonRoy20
👏👏👏#JasonRoy#CWC19#ENGvBAN pic.twitter.com/MrrpKisqzb

tweet
Share on FacebookShare on TwitterShare on PinterestShare on Reddit
Saman SiddiquiJune 9, 2019
the authorSaman Siddiqui
Saman Siddiqui, A freelance journalist with a Master’s Degree in Mass Communication and MS in Peace and Conflict Studies. Associated with the media industry since 2006. Experience in various capacities including Program Host, Researcher, News Producer, Documentary Making, Voice Over, Content Writing Copy Editing, and Blogging, and currently associated with OyeYeah since 2018, working as an Editor.
All posts bySaman Siddiqui