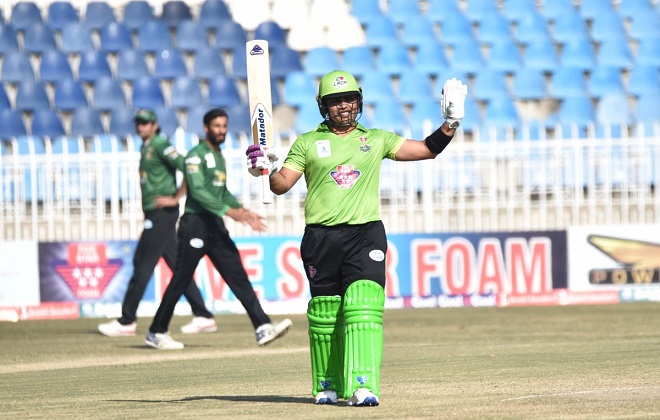 On the 3rd day of the National T20 Cup both Lahore sides, Whites and Blues defeated their opponents with ease. Lahore Blues overcame Rawalpindi’s challenge by 5 wickets. While, Lahore Whites won the game by 22 runs.

In the 1st game, Lahore Blues won the toss and inserted Rawalpindi in. Captained by Umer Amin, Rawadpindi struggled throughout the 20 overs. They inched to 117 for 8 in their 20 overs. Hard hitting batsman Nasir Nawaz top scored with 32 runs, while Haider Ali supported him with 26. Veteran pacer Aizaz Cheema and all-rounder Saad Nasim picked up 3 wickets each.

In reply, Lahore Blues chased down the score with relative ease. They finished the game with 5 balls to spare and 5 wickets down. Lahore Qalandar’s all rounder Agha Salman steered the chase with a composed 38 not out. While, Raza Ali Dar and Nauman Anwar chipped in with 26 and 29 respectively. Zahid Mansoor picked up a brace.

The 2nd match of day saw Lahore Whites, over power Islamabad by 22 runs. Batting 1st Lahore made a fantastic start. The veteran opening pair of Salman Butt and Kamran Akmal score 50s. Saif Badar provided impetus with a quick 28. Lahore finished on 167 for four. Junaid Khan and Adeel Malik were the only wicket takers for Islamabad.

None of the Islamabad batsmen took charge and eventually they feel 22 runs short. Abid Ali, who missed out on Pakistan selection top scored with 30. Faizan Riaz and Rohail Nazir were also among the 20s but no one took the team home. Pakistan discard Bilal Asif picked up 3 wickets, while Amad Butt and Umaid Asif picked up a brace each.