Messi delighted the PSG fans by wearing a t-shirt reading 'This is Paris'. 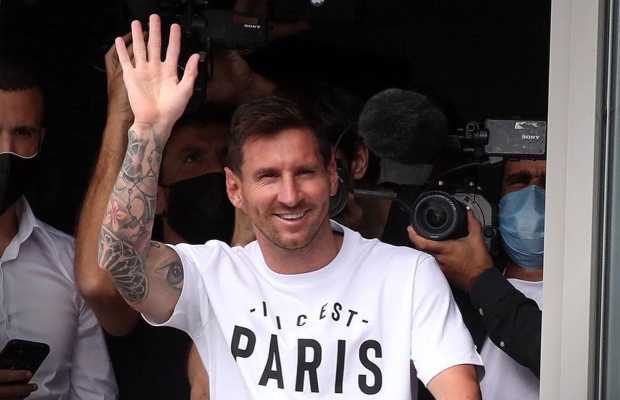 Lionel Messi agrees to join Paris Saint-Germain on a two-year contract after leaving Barcelona, it emerges on Monday.

Messi arrived in France on Tuesday to finalize a deal with PSG, days after announcing his exit from boyhood club Barcelona in a tearful press conference.

As being reported, the six-time Ballon d’Or winner had two other options after leaving Barcelona last week but has chosen to move to the French club on a deal worth £25m per year after tax, plus bonuses.

Furthermore, PSG and Messi will have the option of extending his stay in the French capital by the third year, while the forward will also receive a £25m signing-on fee.
The Argentinian football star had arrived in Paris today, leaving the fans having a mini-festival after news of joining PSG.
Thousands of Paris Saint-Germain fans gathered to greet Lionel Messi who arrived in the French capital to finalize his deal with the Ligue 1 giants.

tweet
Share on FacebookShare on TwitterShare on PinterestShare on Reddit
Saman SiddiquiAugust 10, 2021
the authorSaman Siddiqui
Saman Siddiqui, A freelance journalist with a Master’s Degree in Mass Communication and MS in Peace and Conflict Studies. Associated with the media industry since 2006. Experience in various capacities including Program Host, Researcher, News Producer, Documentary Making, Voice Over, Content Writing Copy Editing, and Blogging, and currently associated with OyeYeah since 2018, working as an Editor.
All posts bySaman Siddiqui