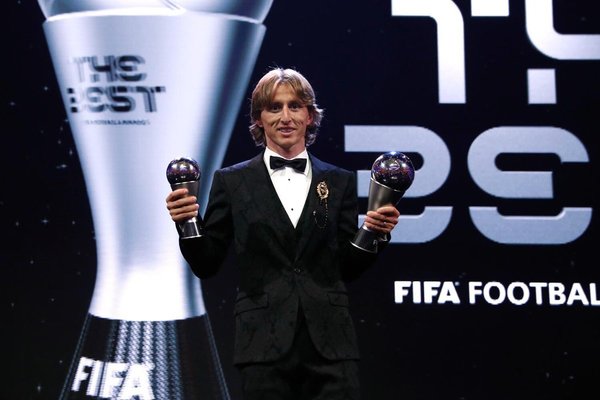 Luka Modric has been named the world’s best male player at the Best FIFA Football Awards, that took place in London. He was competing against the world’s football giants Cristiano Ronaldo and Mohamed Salah to be crowned the top men’s player of 2018.

The 33-year-old, Real Madrid midfielder beat his former team-mate Cristiano Ronaldo, now with Juventus, and Liverpool’s Mohamed Salah to win the award. He has also ended the 10-year reign of Cristiano Ronaldo and Lionel Messi, leaving the duo’s score tied up with 5 awards each.

For those who are new to football, Luka Modric is  a Croatian professional footballer who plays as a midfielder for the Spanish Club Real Madrid and is the captain of the Croatia national team. In May, Modric won his third Champions League title in a row and made history by guiding Croatia to their first World Cup final in July. He also won the golden ball for the best player at this year’s FIFA world cup!

Mohamed Salah received the Puskas award for best goal for his strike against Everton in the Merseyside derby last December.

Brazilian Marta Vieira de Silva, was crowned best women’s player for a record sixth time! She also holds the record for the most goals scored in the FIFA Women’s World Cup

No one has ever had to start a speech having been named #TheBest player in the world for a sixth time, so no wonder Marta was lost for words!