Rana Abdul scored the goal 69 seconds before the final quarter 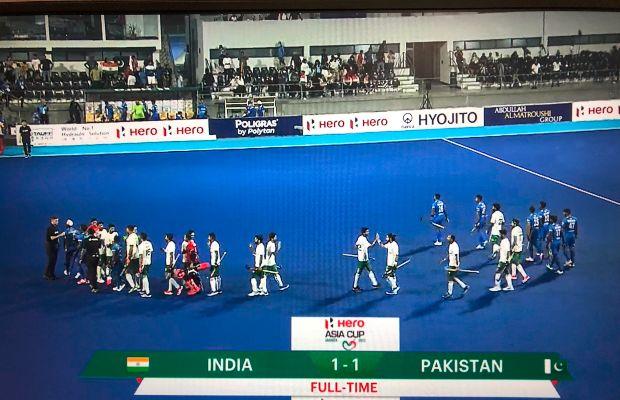 Men’s Asia Cup Hockey 2022 match between the arch-rivals Pakistan and India on Monday resulted in a thrilling draw.

India took lead in the first quarter however, Pakistan scored the equalizer with one minute left in the match.

India converted a penalty corner in the first quarter to take a 1-0 lead and then held onto it.

Selvam Karthi scored his first goal for India in the 8th minute of the first quarter, on the international stage, and that too against fierce rivals Pakistan.

It seemed that the defending champions will manage to hold on to the lead.

But Pakistan sounded the board 69 seconds before the final quarter of the match to make it 1-1.

Rana Abdul scored the goal on the rebound.

There was a referral from the on-field umpire for Fairplay and the game was halted. However, after checking the TV umpire said, ‘No reason for changing (decision)’.