The Argentinian superstar, a six-time Ballon d’Or winner, couldn't control his emotions as he spoke at the presser. 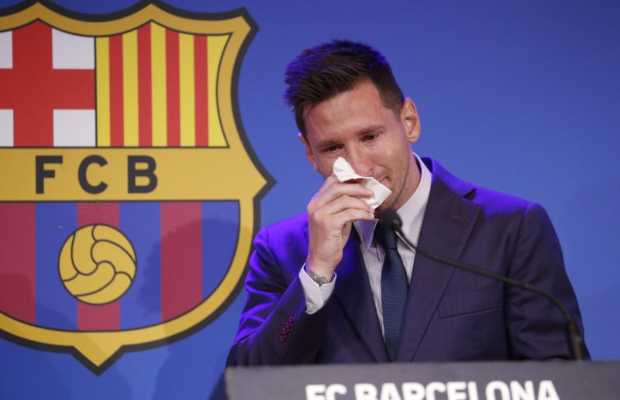 Messi bids a tearful farewell to Barca after spending 21 years at the Catalan club.

GOAT Messi joined Barcelona aged 13 and went on to score 672 goals in 778 appearances for the club.

The Argentinian superstar, a six-time Ballon d’Or winner, couldn’t control his emotions as he spoke at the presser.

“This year, my family and I were convinced we were going to stay here, at home – this is what we wanted more than anything,” said a suited Messi.

“I have still not come to terms with the reality of leaving this club now, changing my life. I love this club.”

Greatest Applause
Of
All
Time pic.twitter.com/YoJt8nkTZc

Messi also admitted that a move to Paris Saint-Germain is a “possibility”.

Europe’s top clubs have dreamed about signing Messi for years, but it has never been financially viable.

Even without a transfer fee, only a handful can afford Messi.

If the deal gets finalized, it means Messi’s reunion with former Barcelona team-mate Neymar, and linking up with Kylian Mbappe, who is regarded as the heir to Messi’s throne as the best player in the world.