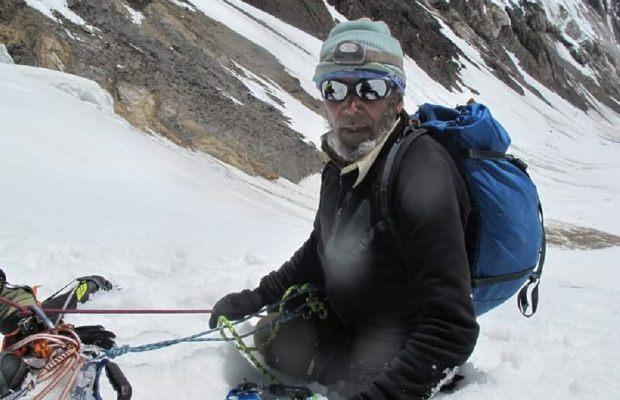 Muhammad Karim aka ‘Little Karim’ has passed away in Rawalpindi after losing his battle against liver cancer.

As being reported, the 71-year-old was admitted to Combined Military Hospital (CMH) and breathed his last on Monday.

Born in Hushe valley of District Ghanche of Gilgit Baltistan (GB), he reached Skardu City in 1976 to fulfill his dream to become a high-altitude porter.

Little Karim holds the world record for scaling the Gasherbrum 2 (8,035m) without supplementary oxygen in 1988.

Little Karim had served as a guide and porter for western tourists on high-altitude expeditions during the 1970s and 80s.

Three French films have documented his life and career, which won many accolades in France and elsewhere in Europe.

Karim was acknowledged as ‘superman’ in the French mountaineering circles after he impressed one and all during Frenchman Jean-Marc Boivin’s hang glide from the summit of Gasherbrum 2 in 1985.

Following the news of his sad demise, tributes pour in on Twitter’s timeline.

Funeral prayer of international acclaimed Mountaineer Little Karim has been offered in Rawalpindi
Next stops:
Skardu, Khaplu and the final at Hushe #LittleKarim #CristianoRonaldo #moutaineer pic.twitter.com/e2okuzDUf2

Saddest News coming from CMH Rawalpindi!
International Hero, Pride of Mountains and the legendary mountaineer Mr. Little Karim is no more between us. May Allah Almighty rest his beautiful soul in eternal peace and comfort! My deepest condolences to the family! #littlekarim #RIP pic.twitter.com/FH2PIArgsV

Renowned mountaineer Muhammad Karim aka Little Karim has passed away in CMH Rawalpindi this morning.

Legendary climber Little Karim passed away in CMH Rawalpindi.
Three documentaries were made on his life and climbing struggles. #LittleKarim pic.twitter.com/zoEFbvA9EG

إِنَّا ِلِلَّٰهِ وَإِنَّا إِلَيْهِ رَاجِعُونَ
The legendary climber and pride of Pakistan Little Karim is no more between us. He has passed away in CMH Rawalpindi today in the morning. May God rest his soul in Janntul Firdos. Ameen!!#LittleKarim#SupremeCourt#SamaaTV#Bhai pic.twitter.com/jobP7Hf852