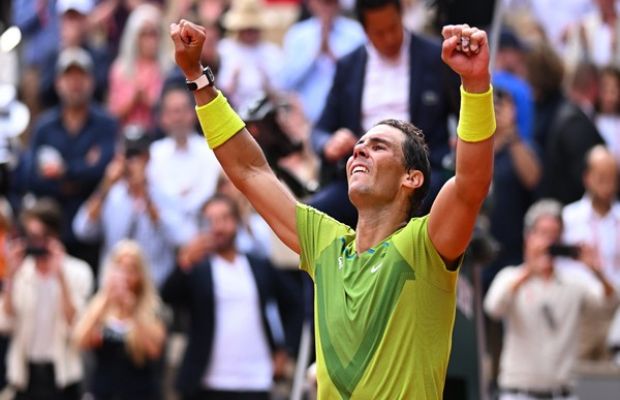 Sunday saw world Number five Rafael Nadal put up a dominant show against Casper Ruud of Norway to win the men’s singles final match 6-3, 6-3, 6-0 at the Court Philippe-Chatrier, in the French capital, to clinch his record 14th French Open crown and his 22nd grand slam title.

The victory has made Nadal race ahead of Roger Federer and Novak Djokovic.

Rafael Nadal after winning the toss chose to serve first where he went on to hold the first game followed by a break in the very next game to take a 2-0 lead.

Casper Ruud tried to make a comeback of sorts breaking the Spaniard in the next game to make it 1-2 but Nadal was in sublime form breaking the Norwegian for the second consecutive time in the opening set to extend his lead 3-1.

In the second set, 8 seeded Casper Ruud broke Nadal in the fourth game to take a crucial 3-1 lead but the Spaniard made his way back, breaking him in the next game and from there on he never looked back won all the games to take the second set with a similar score line as the first set of 6-3.

Ruud was no match to Nadal in the third set, as the clay-court king raced to a 3-0 lead.

World no.5 Rafael Nadal dominated the clay court in such a way that Ruud even failed to win a game as Spaniard won the set 6-0.

tweet
Share on FacebookShare on TwitterShare on PinterestShare on Reddit
Saman SiddiquiJune 5, 2022
the authorSaman Siddiqui
Saman Siddiqui, A freelance journalist with a Master’s Degree in Mass Communication and MS in Peace and Conflict Studies. Associated with the media industry since 2006. Experience in various capacities including Program Host, Researcher, News Producer, Documentary Making, Voice Over, Content Writing Copy Editing, and Blogging, and currently associated with OyeYeah since 2018, working as an Editor.
All posts bySaman Siddiqui