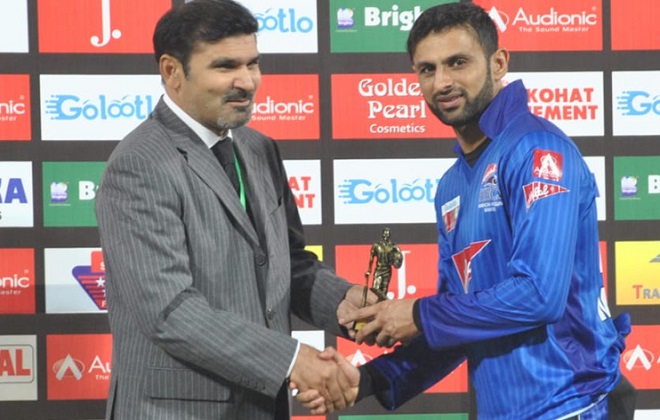 On the 6th day of the on going National Twenty20 Cup, Fata and Karachi Whites collected easy wins against Multan and Peshawar. Veteran all rounder Shoaib Malik was the star performer of the day hitting a match winning 71.

In the 1st game of the day, Multan batting 1st and scored 136-9. Mohammad Mohsin, played a fantastic innings, scoring 56 of 32 balls. He hit 7 fours and a six. Hasan Raza contributed 28. However, Mohsin did not get support from any other batsmen as the former Karachi Kings pacer Mohammad Irfan bamboozled batsman with his tricky action, picking up a five wicket haul. Asif Afridi also picked up a brace.

FATA, had Samiullah to thank as he played a solid innings of 58. Apart from Bismillah Khan, all other batsmen reached double figures as the side reached their target with ease. Lahore Qalandar’s all rounder Sohail Akhtar and Asif Afridi finished the game off with 4 balls to spare. Zulfiqar Babar and leg spinner Mohammad Irfan picked up two wickets each.

Karachi Whites faced up to Peshawar in the 12th match of the tournament. Khurram Manzoor once again was amongst the runs scoring 53. However, the star of the show was definitely Shoiab Malik taking advantage of the platform laid by Khurram. He started at a run a ball and exploded at the back end of the innings, finishing with a strike rate of 173. Karachi ended up with 161/3. Imran Khan, the Pakistan test bowler, Imran Khan, the Pakistan T20 bowler and Mohammad Junaid picked up one wicket each.

Despite a decent start from Fawad Khan and Israrullah, Peshawar always lagged behind. Arshad Iqbal with 3 wickets, Raza Hasan and Akbur ur Rehman with 2 each broke the back of the Peshawar batting line up. Raees Ahmed top scored with 31 but it was never enough as Karachi emerged victories by 21 runs.

Multan with the loss have lost the top spot in the league table and Lahore Whites lead it thanks to a better net run rate.