PAK vs NZ: Netizens troll Shan Masood for yet another duck

The left-handed batsman failed to perform in three consecutive innings. 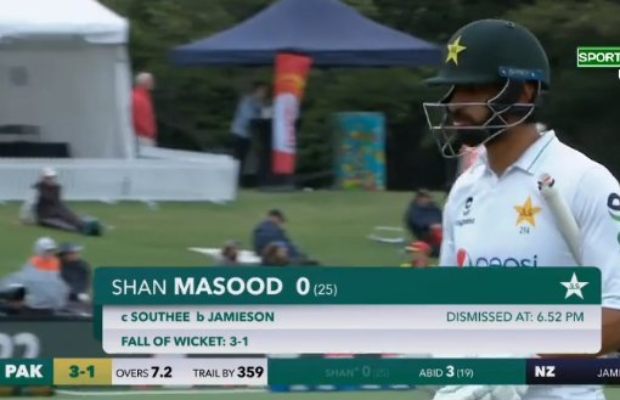 The left-handed batsman Shan Masood fumbled yet again and went for a duck against New Zealand on the 3rd day of the second Test match.

On day 3, New Zealand started and ended the day at Christchurch on a pretty high note.

After thrashing Pakistan’s pace attack, Shan Masood was sent back to the dressing room at naught by before stumps on day 3.

While in the second Test against New Zealand the left-handed Pakistan opener has also scored a pair of ducks.

It was another fruitful day for the BlackCaps as Williamson scored a masterful double century and became the fastest Kiwi to reach 7000 Test runs.

Pakistani cricket fans cant keep their cool after the poor performance by the opening batsman:

Another century missed by Shan Masood and this time just by 100 runs😒 #PakvsNz pic.twitter.com/wZ31O21GwI

Another 0 for Shan Masood.
Once a Legend is Always a Legend.#PakvsNz pic.twitter.com/elTFMb1ieB

End of An Era.
We will Miss you Legend Shan Masood.#PakvsNz pic.twitter.com/3wvKOwecji

Shan Masood: I'm not a batsman for test format