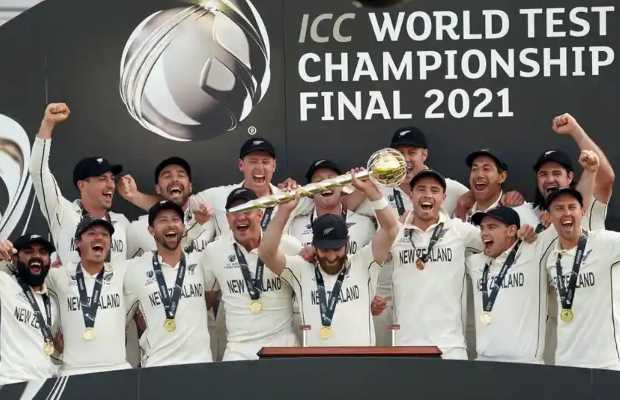 New Zealand made history in cricket after defeating India by eight wickets in the inaugural World Test Championship final at Southampton on Wednesday.

Skipper Kane Williamson and senior-most player Ross Taylor steer New Zealand to their first big ICC prize after their fast bowlers set 139 to chase for victory on the reserve day at Southampton.

Williamson registered his 33rd Test fifty scoring an unbeaten 52 while Taylor scored 47 runs as the Kiwis registered the big win.

The winning runs came off Taylor’s bat as he flicked a delivery of pacer Mohammed Shami towards deep square leg fence for four.

Tim Southee laid the foundation for Kiwis’ victory, who starred with the ball by picking up four wickets earlier on Wednesday.

India was bowled out for 170 in their second innings, setting New Zealand a target of 139 in 53 overs.

New Zealand captain Kane Williamson who played in both of his country’s previous Men’s Cricket World Cup Finals, losing One Day International tournaments to Australia in 2015 and then to England in 2019, said, “It’s a very special occasion and a fantastic feeling having been involved in a couple of Finals previously.”

“I suppose one was… well, the first one was one-sided, the second one was pretty interesting, and this feeling is a bit different to those, which is great. I know the guys will celebrate that,” he added.

“It was the pinnacle – being involved in the Final against a formidable side like India,” Williamson said.

“They certainly showed their quality and it was a lot of heart that allowed us to stay in the game for long periods.

“A lot of credit goes to the way our group adjusted and stayed in the battle because it was a battle. No one with the bat got momentum at any point in time – the ball kept going past the outside edge and there were always opportunities.