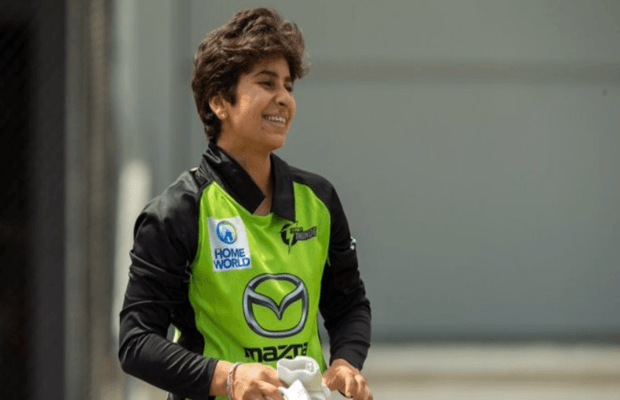 All-rounder Nida Dar has made history as she is the first female cricketer from Pakistan to play in an international league.

In the opening game of the 2019 edition, she returned with expensive figures of 2-44 in her four overs and played a slow knock of 14-ball 12.

What a moment for Nida Dar and the Sydney Thunder! #WBBL05 pic.twitter.com/zp9JthLtr0

However, Nida’s, side Sidney Thunder, lost the fixture by a decisive 49-run margin.

Sixers, who elected to bat first, finished their innings at an impressive total of 192-6 with skipper Ellyse Perry leading from the front with her half-century. She scored a blistering 48-ball 81 with the help of 13 boundaries and a six.

Nida got some support from Alyssa Healy who made 42 off 32 balls. They managed to put on an 83-run opening partnership.

Thunder’s batting lineup, in chase of the 193-run target, was put on a futile resistance and were made restricted to 143-9 in their 20 overs.

Alex Blackwell’s half-century went useless as she no one else could hold the bails, she saw her partners come and go at the other end. Blackwell was the top-scorer with her 56 off 38 deliveries.

While Perry was on top with the ball as well as she finished with figures of 2-13 in her three overs while Sarah Aley bagged three wickets for the last year’s runners-up.