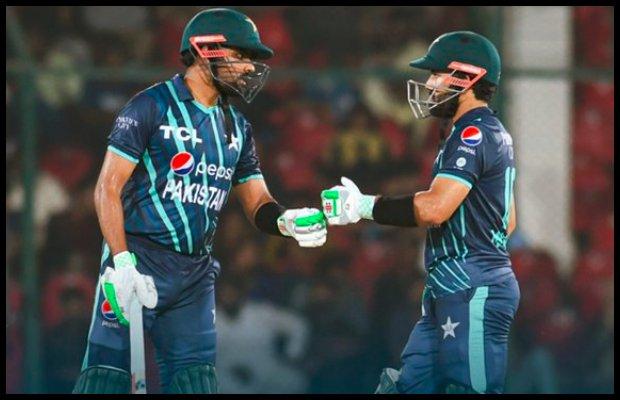 Pakistan beat England by 10 wickets in the second T20 match in Karachi on Thursday,

The feat led Pakistan to become the first T20I team to chase a 200-run target without losing a wicket!

Babar Azam and Mohammad Rizwan breaking the opening partnership record case were spectacular on display in front of a packed house at the National Stadium Karachi.

The duo overhauled a mammoth 200-run target with three balls spare against the visiting England to hand Pakistan their second 10-wicket win in the format.

They have become the only pair to put seven 100-plus stands together and to make over 1,800 runs together.

Babar, after a string of bad scores in the ACC Men’s T20 Asia Cup, showed remarkable recovery with the bat and completed his record second century.

While Rizwan supported his partner as hit an unbeaten 88.

For those unserved, Pakistan is the only team to chase a target of 150 or more without losing any wicket on two occasions.

Last year, the Pakistani team chased a 152-run target against the arch-rivals India in the T20 World Cup match in Dubai.

Celebrations are in order for the Pakistan opening pair on record performance.

What a way to finish the game! This will go down as a memorable chase for @babarazam258 and @iMRizwanPak but also all of us as a nation. You can’t stay down for long when you’re the best.🇵🇰 #PAKvsEng pic.twitter.com/WGt6ON2kej

This is the shut up call from Babar to his haters 🤫 #BabarAzam𓃵 pic.twitter.com/Gww7ygQVcn

Chasing 200 without losing a wicket 😱 What an incredible batting display by the best in the world!! Babar Azam & Mohammad Rizwan putting on an absolute exhibition tonight 🔥👏 They timed that run chase to perfection! Well played @TheRealPCB 👏 #PAKvsEng

Bam Bam Babar showing why he's the best T20 batter in the World @babarazam258. Its not only the runs. Its the way he gets them#PakvsEng2022 #PAKvsEng

Top class batting by @babarazam258 and @iMRizwanPak to win a high scoring match tonight. This is the intent required to chase 199. Really happy for Babar to gain his form against such a top team. Well played boys! @TheRealPCB #PAKvsEng

tweet
Share on FacebookShare on TwitterShare on PinterestShare on Reddit
Saman SiddiquiSeptember 23, 2022
the authorSaman Siddiqui
Saman Siddiqui, A freelance journalist with a Master’s Degree in Mass Communication and MS in Peace and Conflict Studies. Associated with the media industry since 2006. Experience in various capacities including Program Host, Researcher, News Producer, Documentary Making, Voice Over, Content Writing Copy Editing, and Blogging, and currently associated with OyeYeah since 2018, working as an Editor.
All posts bySaman Siddiqui