Iram Javed managed to put 21 off 17 on the scoreboard that later helped the side finish at a defendable total of 126-7. 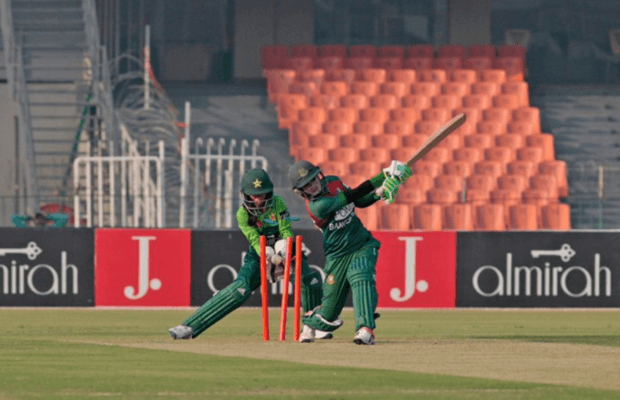 Pakistan has beaten Bangladesh by 14 runs in the opening game of their three-match women’s T20I series at Gaddafi Stadium, Lahore on Saturday.

After electing to bat, the hosts were struggling at 14-2 but the skipper Bismah Maroof (34 off 29) and Umaima Sohail (33 off 36) secured the victory for Pakistan with their 60-run partnership for the second wicket.

However, the middle order began to wilt under pressure and the side was reduced to 97-5 after the second wicket partnership was broken up.

Iram Javed managed to put 21 off 17 on the scoreboard that later helped the side finish at a defendable total of 126-7.

The visiting side, Bangladesh had a disastrous start when came to bat. The side getting reduced to 6-2 as Anam Amin and Diana Baig took early wickets. Nigar Sultana and Sanjida Islam in an attempt to recover the side managed to put up a 36-run partnership for the wicket.

Sultana and Sanjida were dismissed in quick succession, with the score on board 47-4.

Rumana Ahmed stepped up a gear in the later stages of the innings by scoring boundaries, belting15 runs off Diana Baig’s over. Her half-century gave some life to the Bangladeshi side.

However, Bismah Maroof tried to bowl her side to victory but she kept leaking runs.

Aliya Riaz finished with superb figures of 1-12 in four overs, was given the responsibility of defending 18 runs off the final over.

The pacer dismissed Rumana on the second delivery and gave away three runs at the end, earning a win for the hosting side.

tweet
Share on FacebookShare on TwitterShare on PinterestShare on Reddit
Saman SiddiquiOctober 26, 2019
the authorSaman Siddiqui
Saman Siddiqui, A freelance journalist with a Master’s Degree in Mass Communication and MS in Peace and Conflict Studies. Associated with the media industry since 2006. Experience in various capacities including Program Host, Researcher, News Producer, Documentary Making, Voice Over, Content Writing Copy Editing, and Blogging, and currently associated with OyeYeah since 2018, working as an Editor.
All posts bySaman Siddiqui