Pakistan’s openers Mohammad Rizwan and Babar Azam created a record of Pakistan’s best-ever partnership for any wicket against India in T20Is. 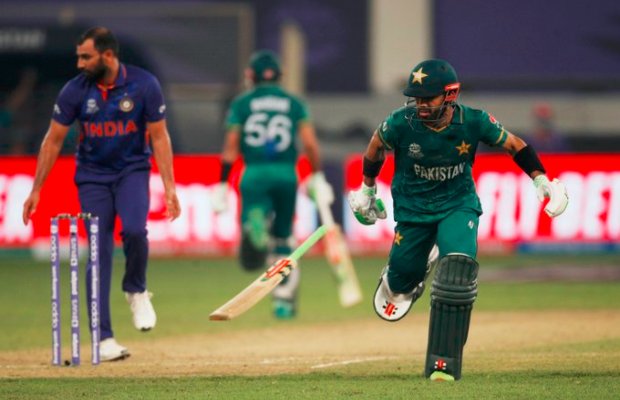 Pakistan hammers India by 10 wickets to register their first-ever win over their arch-rivals in the fourth match of the T20 World Cup Super-12 stage played in Dubai.

It was a historic day for Pakistan cricket as the boys in green excelled both with the bat and the ball.

Skipper Babar Azam and Muhammad Rizwan made the highest partnership for the T20 World Cup in the clash against India.

Babar scored blistering 68 runs off 52 balls and Muhammad Rizwan at the other end of the crease scored flawless 79 runs off 55 balls.

The duo scored 152 runs creating a record of Pakistan’s best-ever partnership for any wicket against India in T20Is.

Pakistan after winning the toss put India to bat first, and the decision turned out to be the best in the green team’s favour.

Shaheen brought the early breakthrough for his team as he sent back both the openers Rohit Sharma and KL Rahul to the dressing room.

Rohit went for a duck while KL managed to score three runs only.

Suryakumar Yadav walked back to the pavilion on 11 (8).

Rishabh Pant departed on 39 off 30 balls.

Ravindra Jadeja was dismissed on 13 off 13 balls by Hassan Ali.

Kohli got out on 57 off 49 balls on Shaheen’s delivery.

And rest is the history now!

Pakistan achieved the target with 13 balls to spare.

While Chakravarthy conceded 33 runs in 4 overs.