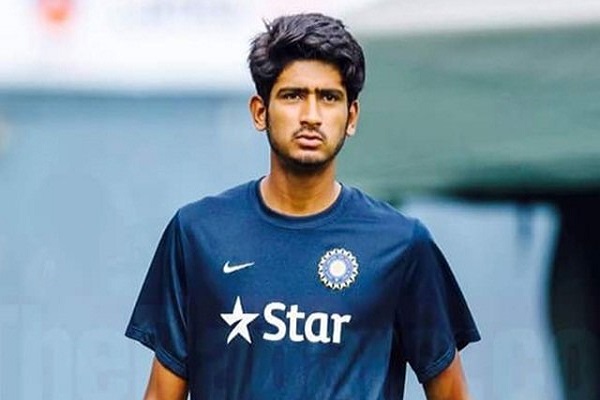 The world of cricket has changed. The stereotype vegetable eating (a Pakistani myth) slow Indian pacers has been broken. Jasprit Bumrah, has done a lot to break that mound. Yesterday, we saw a new Indian pacer on display, Khaleel Ahmed. The left armer showed promise and one of the highlights on a rather sluggish day for India. His 2nd wicket was the best one for me, bowling around the wicket he angled one in, taking the edge from an awkward length. It showed that he could generate bounce and use it as a weapon.

Well, this was an excellent delivery, it showed that this bounce could be detrimental for him at times. Like most left arm pacers, he was unable to bring the ball back into the right handers. So he had to rely on angles going around the wicket at times. However, the boundaries he conceded did mostly come when width was on offer. At this early stage of his career, he seems to be having trouble trying to bowl a consistent line. On varying lengths he offered width early to Nizakat Khan, who drove, cut and punched his way to three boundaries. Even in his comeback spell, the boundaries were all on the off side. Only a handful of deliveries were hitting the stump in his spell.

One would hope Pakistani batsmen or the team management was glued to the screen watching this youngster. In Babar Azam and Shoiab Malik, Pakistan have two decent cutters of the ball. Fakhar Zaman is unlikely to spare any short ball on his body as well. However, due to the potentially disconcerting bounce they would have to be cautious when they attack. Indian attack has as much variety (if not more) than Pakistan. Kumar, looked a bit rusty coming from a long layoff. It also would be interesting to see how Bumrah adjusts to bowling a full length in England to UAE white ball cricket.

Thanks to our decision makers (civilians and otherwise) Pakistani and Indians do not get much chance to enjoy this rivalry. Asia Cup offers a chance to have a miniseries between these two giants. Bring on the fun!