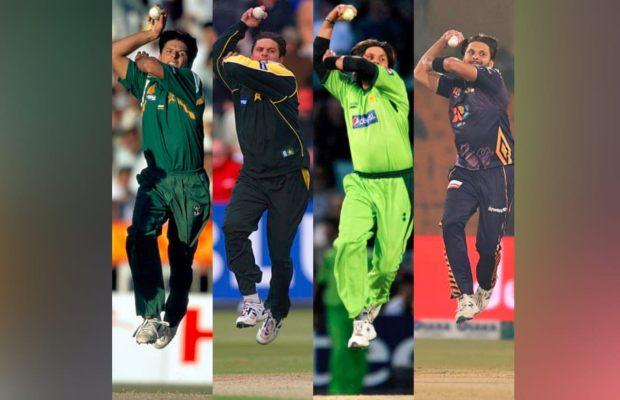 Shahid Afridi pulled out of PSL 7 sighting health issues and the country reacts to the announcement regarding it as an end of an era.

Former all-rounder debuted on the cricket ground 26 years ago and his hard-hitting with the bat earned him the title of Boom Boom Afridi.

Pakistan is thankful to the cricket star for all his contributions and memories for the country.

The sudden announcement to quit cricket came as a sudden blow for PSL franchise Quetta Gladiators on Sunday as the team was due to play its match against Islamabad United just a few hours later.

Pakistan pacer and Lahore Qalandars skipper Shaheen Shah, who is going to be Afridi’s son-in-law, like millions of other cricket fans, also reacted to the news.

Shaheen told Afridi in a tweet said that he is the pride of Pakistan and his “presence will be missed in the PSL”.

“Your presence will be missed in the PSL Lala @SAfridiOfficial. You are the Pride of Pakistan for a reason. Get well soon,” he tweeted.

Former Pakistan batsman Saeed Anwer reacting to the news said. ” We opened together Shahid, definitely, the world of cricket miss you, not gonna ever retired from everybody’s heart, best wishes for the Next innings Boom Boom.”

We opened together Shahid, definitely, the world of cricket miss you, not gonna ever retired from everybody's heart, best wishes for the Next innings Boom Boom.#shahidafridi #Cricket 🇵🇰❤ pic.twitter.com/rAcAtkL2f4

While former fast pacer Shoaib Akhtar advised the 41-year-old to take some rest.

“Rest, lala (Afridi’s nickname). Is umar main yeh ishq nahi asaan (this love is not easy at this age),” Akhtar said in a tweet.

Ever since Shahid Afridi announced his retirement all sorts of reactions are pouring in social media.

Thank you Lala for all the contributions & memories Pakistan's #GOAT🙌 pic.twitter.com/jQsKsukdmz

#ThankyouShahidAfridi Thanks for all the memories dear lala. There is no cricket without you. Fan forever ❤️1123 wickets in 943 matches, at an average of 28, plus 20975 runs with 99 fifties and 21 centuries including more than 850 sixes, that's huge Lala!! @SAfridiOfficial pic.twitter.com/bKMcHyZISg

From Last 26 years , this guy is ruling over the hearts of Pakistanis #shahidafridi

Good bye to PSL by him , nation remembers him as a hero.
Thank you @SAfridiOfficial pic.twitter.com/QXJZi8bJC5

Nothing is more exciting than seeing Shahid Afridi’s celebration style live in Gaddafi Stadium Lahore, that was the best feeling. Also what a come back from Boom Boom. Love you Lala. Night made! Thank you!💜
SHAHID AFRIDI IS LOVE!🤩⚡️#PSL7 #PSL2022 #ShahidAfridi @SAfridiOfficial pic.twitter.com/N6R50yBoAe