Pakistan registers its first win of the ICC Men’s T20 World Cup 2022 on Sunday by beating the Netherlands by six wickets.

It was also Pakistan’s first-ever win in Australia in T20Is. 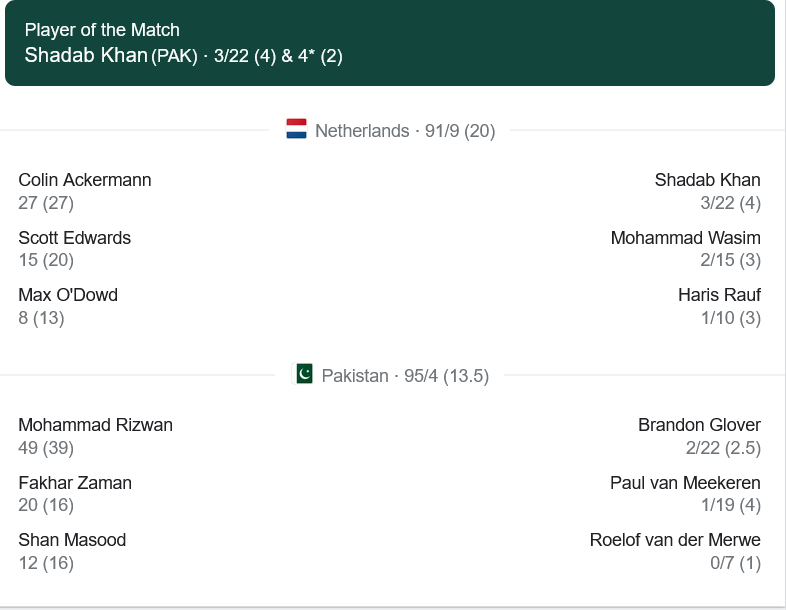 The green team stepped on the field with one change in the squad, including Fakhr Zaman in place of Haider Ali.

While Fakhar has usually batted as an opener or, most recently, at No. 3 for Pakistan, he was carded at No. 4 with Shan Masood finding considerable success at No. 3 at this T20 World Cup so far.

The Netherlands won the toss and elected to bat first against Pakistan in the all-important Super 12s clash of the event.

The dutch side managed to put a 93 runs target with Colin Ackermann top scorer for the side with run-a-ball 27.

While Shadab Khan was the pick of the bowlers for Pakistan as he claimed 3-22 in four overs.

Pakistan registered a comprehensive six-wicket win over the Netherlands by completing the target of 92 runs in just 13 overs.

It wasn’t a good day for skipper Babar Azam with the bat, as he was run out for just four runs.

It is for the first time in Babar Azam’s  T20I career that he has been dismissed three times in a row for a score of under 10.

A partnership between Rizwan and Fakhar Zaman established a stand of 37 off 31 deliveries which helped Pakistan motor along in their small target chase.

Fakhar’s scored 20. He was bowled by Brandon Glover, with Scott Edwards taking a terrific diving catch behind the stumps.

Rizwan missed out on his half-century by just one run, with Paul van Meekeren getting his prized scalp.

While Pakistan went on to lose another wicket with the scores level and completed the win with enough overs in the bank.

From here on, if Pakistan wins their last three games – against Netherlands, South Africa, and Bangladesh – then they have a chance to finish on six points.

However, that may not be enough for the green team to qualify for the semi-finals since they need other results as well.

If India beats South Africa later today, among others – it might go in Pakistan’s way to have a chance of making it to the top two.