The bowlers put a stranglehold on the opposition 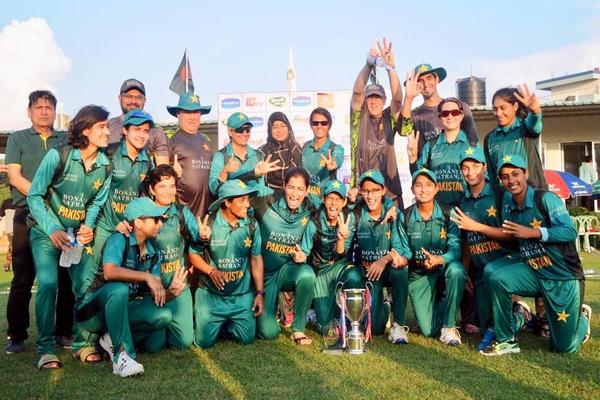 Pakistan women’s team completed their whitewash against Bangladesh by winning the last T20 by 7 wickets. The team made light work of the Bangladesh team as the bowling never allowed them to threaten. It was a comprehensive series win for team green.

Earlier in the week Bangladesh were bowled out for a paltry 30. They did improve, to score 81 and 77 in the next two T20is but it was never enough to challenge Pakistan. After the 1st T20i was washed out, Pakistan took control from the outset at the start of 2nd match of the series.

Anam Amin as adjudicated player of the match after picking up 3 wickets without conceding any runs in her spell. It broke the back of Bangladesh’s case after Pakistan had posted 88 in 14 in a curtailed match up. In the 3rd game, Natalia Pervaiz early strikes helped restrict Bangladesh to mere 77 in 20 overs and it was chased down with relative ease. Natalia took the award of player of the match. The final T20i saw Nahida Khan’s steady hand as an opener as she steered Pakistan safety to the target of 82. 1st time in the series, a batswoman got the award.

It is a morale boosting win for Pakistan as they were clinical in their approach. Bowlers set up the win, and the batswomen did not disappoint.

The two teams will compete in a 50 over contest tomorrow.