He brought up a hundred from 220 balls including 8 fours and 2 sixes. 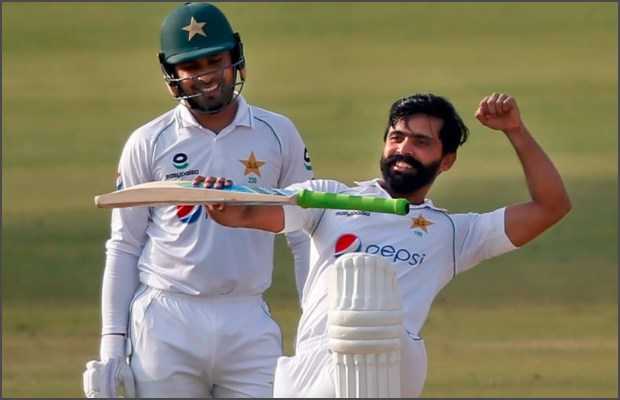 Fawad Alam century saved the day for Pakistan against South Africa on the second day of the First Test at the National Stadium, Karachi,

Pakistan batting lineup was reduced to 33/4, at the end of Day 1 of the Karachi Test, but bounced back on the 2nd Day with Fawad Alam’s efforts.

Alam’s brilliant match-defining hundred, the third Test century, helped the home side end the day at 308/8, a lead of 88, against South Africa.

Alam’s century formed the bedrock of Pakistan’s efforts on the second day, as he put on sizeable partnerships with Azhar Ali, Mohammad Rizwan, and Faheem Ashraf to ensure Pakistan keep hold at the match that seems to be going out of hands at the end of the first day.

The home side was under pressure at 27 for 4, but Fawad’s experience stood tall against South Africa and he brought up a hundred from 220 balls including 8 fours and 2 sixes.

The batting line made Kagiso Rabada wait for his 200th Test wicket for another day at least.

Here is how social media reacts to Fawad Alam’s brilliant knock today as PCB neglected him to include in the playing eleven for the past 11 years.

Scored his 3rd Test 💯 in 14th inning of 8th Test, he registered this after 11 long years since his test debut in July 2009, just because #PCB SNATCHED 10 golden years of his Career. He would've been played 50+ games otherwise.#FawadAlam 🏏#PAKvsSA
This will always Haunt PCB 👇 pic.twitter.com/eM0DhDHt0C

Another 100 by @iamfawadalam25. So I'd like to know who will be answerable for not selecting him all these years?

SO FREAKING HAPPY FOR FAWAD ALAM!! A fighting century! Showed what it is to have home ground advantage- scrappy- gritty- brilliant knock under pressure! Nobody deserves it more than him- the hero we all needed to save this match. 🙌🏻🙌🏻 #PAKvsSA #fawadalam

Sindh & #fawadalam have one thing in common, both ignored despite top notch performance. #Truth

Fawad Alam's silent Msg For Those Selectors who Wasted His 10 Years 👌 #FawadAlam pic.twitter.com/YxwsNnvcZL

What an inspiration for us. Just believe on your skills and hardwork. Your time will come. #fawadalam

What a shamashing innings from @iamfawadalam25 👏👏
Very well done 👏👏..
He score 109 with the help of 9(4) & 2(6)
What a brilliant performance proud of Pakistan.
Many more achievements waiting for you.
Congratulations on completing 500 test runs in 8 matches #FawadAlam pic.twitter.com/ofvn4mAy06