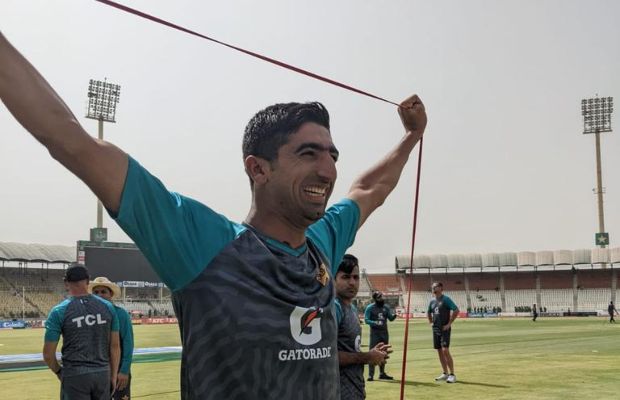 The Larkana-born 23-year-old pacer was given an ODI cap by Shaheen Afridi ahead of the third match against the visiting WI.

Dahani has become an overall 235th ODI cricketer from Pakistan.

A video message has been shared by PCB before Dhani received his ODI cap today.

The PSL 2021 star bowler Dahani said he never thought of playing for Pakistan while coming from a small town.

“Playing in T20Is, now getting a chance to make debut in ODIs, it’s like a dream for me. I never thought of coming this far from a small town,”  Dahani said.

“It is just a start. I will work hard and make it to all three formats of the game,” he added.

.@ShahnawazDahani is making his ODI debut today against West Indies 👏

“Every player wants to make his debut memorable, and so do I. I will put in all my efforts to make the most of this opportunity,” emphasized the young cricketer who made his T20I debut in 2021, having played two 20-overs games so far against Bangladesh and West Indies.

“My message to youngsters is to never lose hope. Keep working hard,” he concluded.

tweet
Share on FacebookShare on TwitterShare on PinterestShare on Reddit
Saman SiddiquiJune 12, 2022
the authorSaman Siddiqui
Saman Siddiqui, A freelance journalist with a Master’s Degree in Mass Communication and MS in Peace and Conflict Studies. Associated with the media industry since 2006. Experience in various capacities including Program Host, Researcher, News Producer, Documentary Making, Voice Over, Content Writing Copy Editing, and Blogging, and currently associated with OyeYeah since 2018, working as an Editor.
All posts bySaman Siddiqui