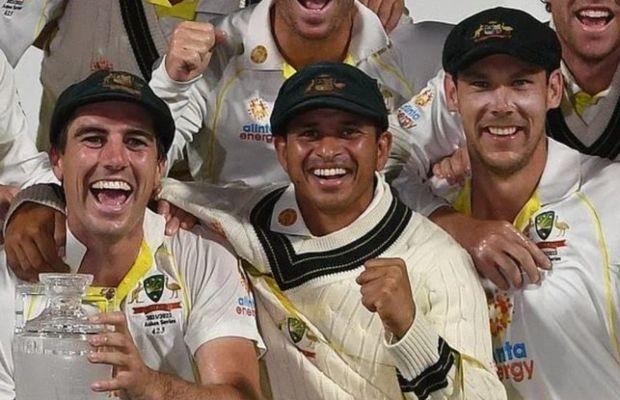 Australia captain Pat Cummins has won hearts for his gesture towards Usman Khawaja.

Aussie skipper is being lauded for his leadership qualities after a video of him asking his teammates to put away champagne to allow batsman Usman Khawaja take part in the celebrations of his team winning the Ashes went viral.

He made a triumphant comeback to Test cricket by scoring two centuries in the fourth match.

Usman had stepped aside to avoid being sprayed with alcohol in keeping with his Muslim beliefs when the team was celebrating their Ashes victory on the dais in Hobart.

As Cummins noticed Khawaja avoiding stepping on the dais to avoid being sprayed with booze and asked his teammates to put aside the bottles and gestured for Khawaja to rejoin them on the dais.

Khawaja returned to the stage and kneeled beside Cummins joining in the team’s victory celebrations.

“Usman is obviously Muslim, so he doesn’t like the champagne being thrown,” Cummins told reporters.

“I just made sure he got up there and no champagne was thrown.”

The moment was caught on camera and went viral on social media.

May seem like a relatively small gesture by Pat Cummins, but would have been massive for Usman in feeling acknowledged and part of the team 👏👏👏 https://t.co/EgYOhhDfTY

He tells the team to put away the champagne, so that his Muslim teammate Usman Khawaja can join in the celebration. pic.twitter.com/fuw3DReYve

Usman Khawaja also took to Twitter to thank his teammates for stopping their usual champagne celebration for him.

“If this video doesn’t show you that the boys have my back, I don’t know what will. They stopped their normal champagne celebrations so I could rejoin. Inclusivity in the game and our values as a sport are so important. I feel like we are trending in the right direction,” he tweeted sharing a video clip from the day.

If this video doesn't show you that the boys have my back, I don't know what will. They stopped their normal champagne celebrations so I could rejoin. Inclusivity in the game and our values as a sport are so important. I feel like we are trending in the right direction 🙏🏾🇦🇺 https://t.co/LrthzP9v2N