According to Chief Selector Muhammad Wasim, the management had made only necessary changes to the squad. 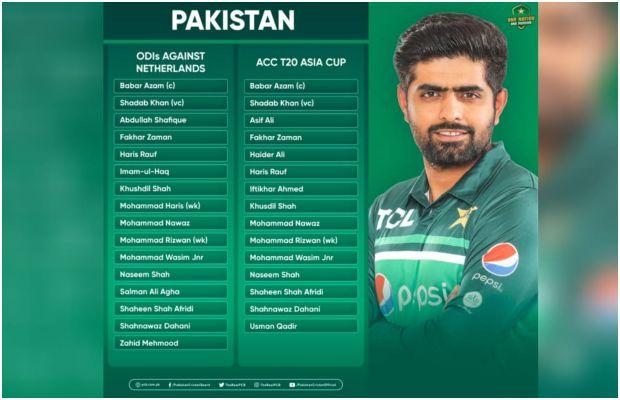 The Pakistan Cricket Board, PCB, has announced squads for the ICC World Cup Super League ODI matches against the Netherlands and the T20 Asia Cup, on Wednesday.

However, fast bowler Hasan Ali has been dropped from the squad and replaced with Naseem Shah.

Shaheen Shah Afridi is named in the ODI squad against Netherlands and T20 squad for AsiaCup 2022. However, his availability to return to international cricket is subject to the approval of the medical staff of PCB.

Chief Selector Muhammad Wasim said that the management had made only necessary changes to the squad.

“Both the competitions are important for us and we have picked our best available players in consultation with the captain and head coach,” he said.

Commenting on Hasan, Wasim said the pacer had been given a break from international cricket and he had been replaced by Shah.

“He [Shah] is express fast and can give further impetus to the fast bowling department, which already has the likes of Haris Rauf, Mohammad Wasim Jr, Shaheen Shah Afridi, and Shahnawaz Dahani,” the chief selector added.

He said that Naseem had not played any international white-ball cricket but had demonstrated with the red-ball his skills as an attacking pacer with an ability to swing the ball.

“Salman Ali Agha has been recalled to the ODI side after he performed well in the past two Pakistan Cup tournaments, averaging 40.33 and 48.8, respectively. He also gives Babar Azam an additional bowling option.”