Ufone’s Brand Ambassadors and Baloch football stars Jadeed Khan Pathan and Riaz Ahmed participated in the tournament and provided coaching and mentoring to the young footballers. 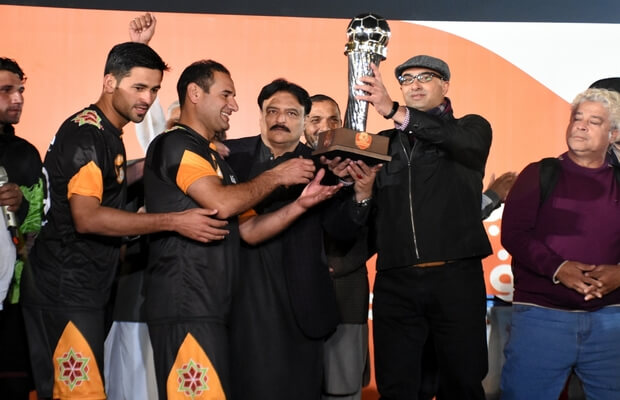 The match had a scintillating start as the players displayed phenomenal talent on the field. In the 13th minute, Peshawar won a penalty kick but Chitral’s goalkeeper made a stunning save. Despite tremendous efforts from both sides, neither could score a goal in the first half. The same trend continued in the second half; both teams tried very hard but were not able to score a point. The winner was chosen on the basis of penalty shootouts. Peshawar defeated Chitral by 5-4.

The final match was played under floodlights and was witnessed by thousands of local football enthusiasts who poured in large numbers to support their favorite teams. After a fairly comfortable win in their respective semi-finals, both Peshawar Combined FC and DFA Chitral knew that the final match will not be an easy task, therefore, they delivered their best performances to win the coveted title.

The Chief Guest of the event handed over the trophy to the winners of the Ufone Football Championship and distributed prizes amongst the players. The celebration was followed by some memorable performances by singer Saif Ali Khan and Peshawar’s singing sensation Gul Khan.

The Qualifiers of the football tournament were played in 21 cities. The city champions then played against each other in the ‘Eliminators’ to get to the Super8 stage. Successful teams at the city level battled it out for a place in the semi-finals with the best two teams securing a spot in the final of the tournament.

The tournament builds on the success of the previous three editions of the same championship in Balochistan. This year, in Khyber Pakhtunkhwa, 64 teams from 21 cities participated to compete for the provincial trophy. 960 young footballers displayed exceptional football talent during the championship.

Ufone’s Brand Ambassadors and Baloch football stars Jadeed Khan Pathan and Riaz Ahmed participated in the tournament and provided coaching and mentoring to the young footballers.