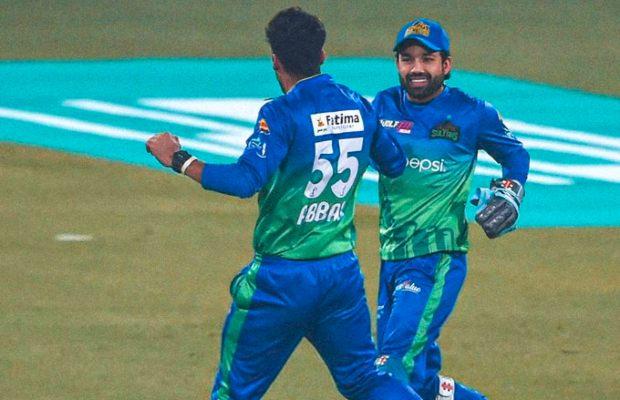 Multan Sultans have become the first team to qualify for play-offs of PSL 7.

Peshawar Zalmi could only put 140 runs on the scoreboard in pursuit of the target of 183 runs.

In this match played at Gaddafi Stadium Lahore, Peshawar Zalmi won the toss and invited Multan to bat.

The defending champions scored 182 runs for the loss of 7 wickets in the stipulated 20 overs.

The Multan Sultans openers once again gave the team a great start, where the first wicket fell in the form of captain Muhammad Rizwan who scored 34 runs at a score of 98.

After that, no player could stop and play and more wickets kept falling but with 34 runs of Tim David the Sultans reached a total of 182.

With a net run rate of 1.14 on the board, Multan Sultans have become the first team to qualify for the play-offs.

The playoffs will kick off on February 24 in Lahore.

tweet
Share on FacebookShare on TwitterShare on PinterestShare on Reddit
Saman SiddiquiFebruary 11, 2022
the authorSaman Siddiqui
Saman Siddiqui, A freelance journalist with a Master’s Degree in Mass Communication and MS in Peace and Conflict Studies. Associated with the media industry since 2006. Experience in various capacities including Program Host, Researcher, News Producer, Documentary Making, Voice Over, Content Writing Copy Editing, and Blogging, and currently associated with OyeYeah since 2018, working as an Editor.
All posts bySaman Siddiqui