PSL 7: Oyeyeah picks the 3 most impressive players so far 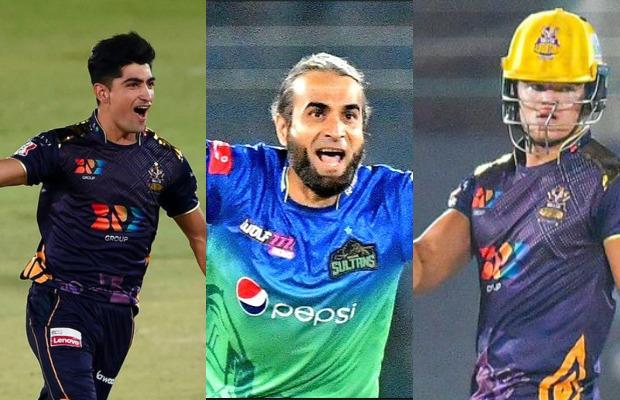 Oyeyeah picks the 3 most impressive players who have performed exceptionally well in the first week of the ongoing seventh edition of the Pakistan Super League (PSL).

Naseem Shah ran through the batting line-up of Karachi Kings with a five-wicket haul to help Quetta Gladiators get an eight-wicket victory and register their first win in the seventh edition of the Pakistan Super League (PSL) on Jan 29.

Quetta Gladiators’ pacer Naseem Shah has been impressive with his sensational figures of 5-20, helping QG to restrict KK to a 113-run total.

The former South African leggie, Imran Tahir, had an outstanding spell for Multan Sultans in which he took three key scalps, in four overs for just 16 runs, in the inaugural contest of PSL 2022 against Karachi Kings.

He took three key wickets of Sharjeel Khan, Mohammad Nabi, and Tom Lammonby to dent Kings’ batting line-up as they could only manage to post only 124 runs on the scoreboard.

He took the first wicket of Kings’ when he dismissed big-hitting Sharjeel for 43 runs with 66 runs on the board.

Imran dismissed Nabi for 10 and Tom for one.

Quetta Gladiators’ batter Will Smeed has been sensational in the match against Peshawar Zalmi on Jan 28.

Will Smeed managed to hit a sensational 97-run knock-off just 62 balls in which he smashed the Peshawar Zalmi bowlers to all parts of the ground with 11 fours and four sixes.

Will Smeed’s outstanding score against Peshawar Zalmi was the second-highest individual score for the Quetta Gladiators on his PSL debut.

It was tough luck that the 20-year-old missed out on a well-deserved hundred.

Who is your favorite team and player so far in the seventh edition of PSL? do let us know in the comments section below.