Shoaib Akhtar to respond legally to PTV for seeking damages worth Rs103.3 million 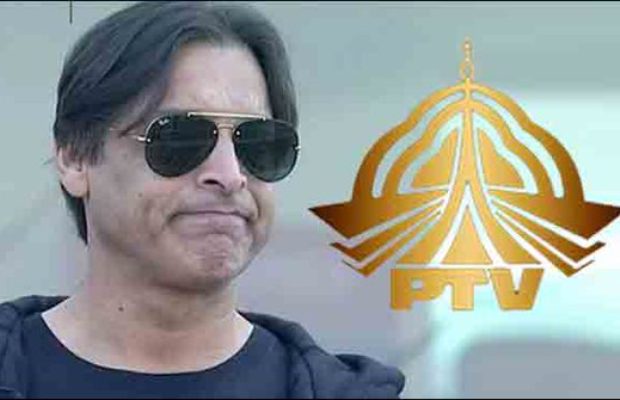 Shoaib Akhtar to respond legally to PTV for seeking damages worth Rs103.3 million!

Former Pakistani fast-bowler Shoaib Akhtar on Sunday announced that he is utterly disappointed with the PTV after the state broadcaster announced taking legal action against him.

Akhtar had resigned during the live show of PTV Sports’s Game on Hai last month after the host Dr. Nauman Niaz asked the former fast bowler to leave the show following a heated exchange.

In a tweet on Sunday, Akhtar said: “Utterly Disappointed. After miserably failing to safeguard my respect and repute while I was working for PTV, they have now sent me a recovery notice. I am a fighter & will not give up & fight this legal battle. My lawyer @SalmanKNiazi1 will take this forward according to law.”

Utterly Disappointed. After miserably failing to safeguard my respect & repute while i was working for PTV, they have now sent me a Recovery Notice. I am a fighter & will not give up & fight this legal battle. My lawyer @SalmanKNiazi1 will take this forward according to law.

PTV  in a legal notice sent to Akhtar stated that he had resigned on-air from PTV sports last month which is not only a violation of the clause but has also resulted in huge financial losses to the organization.

“As per clause 22, both sides shall have right to terminate his agreement by serving three months’ written notice or payment in lieu thereof. Whereas Shoaib Akhtar resigned on air on October 26 which has resulted in huge financial losses to PTV,” the national television administration said in a notice.

Akhtar has been asked by the PTVC to pay an amount of Rs 100 million as damages along with an amount equivalent to a three-month salary to the organization, otherwise, PTC “reserves its rights to initiate legal proceedings” against Akhtar before the court of competent jurisdiction.

Following the incident, social media has been in an uproar demanding the resignation of Dr. Nauman Niaz for insulting a national hero.

Though Dr. Nauman offered an apology that doesn’t seem enough to calm down public sentiments.

Legal Notice sent to PTV Sports Managing Director Amir Manzoor. Nauman Niaz has 14 days to publicly apologise Shoaib Akhtar & to the fans for his misconduct. If Amir Manzoor takes it lightly it will be a huge mistake he will ever make as a MD. #WeStandWithShoaibAkhtar pic.twitter.com/sym5fAdswS

Shouldn't b happened with our heros but we will support u through out ur journey …
So don't b hesitate ….
We r with u #shoaibakhter

Literally everyone in Pakistan saw how @shoaib100mph Shoaib Akhtar, our HERO, was humiliated on PTV. Now PTV has sent a Rs 100 Million defamation NOTICE to #ShoaibAkhtar . Is this a joke? Is this how a NATIONAL tv treats it’s superstars? The whole world is making fun of us – 1/2