Nick Kyrgios receives a walkover through to his first Grand Slam final where he will face either Novak Djokovic or Cam Norrie. 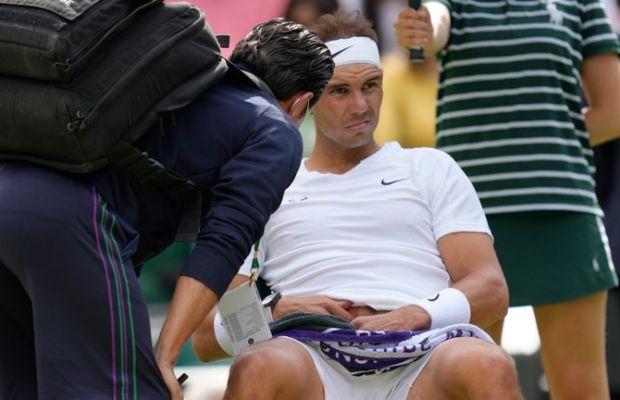 Rafael Nadal has withdrawn from Wimbledon 2022!

The 36-year-old Rafael Nadal withdrew from the Wimbledon men’s semi-final to be played on Friday, due to an abdominal injury.

In a press conference, Rafael Nadal confirmed that he is pulling out of Wimbledon, ending his quest to complete the calendar Grand Slam in 2022.

Following the development, Nick Kyrgios gets a walkover into Sunday’s final against either six-time champion Novak Djokovic or British No 1 Cameron Norrie.

A day earlier, Spaniard battled to an epic five-set victory over Taylor Fritz in his quarter-final despite struggling with an abdominal problem.

Afterward winning the quarterfinal, Nadal said that he would seek medical advice before deciding whether to take on Kyrgios in the semi-finals on Friday.

Spanish media reported Nadal had suffered a seven-millimeter tear to his abdominal muscle.

Speaking at a press conference on Thursday, Nadal said: “Unfortunately as you can imagine I am here because I have to pull out from the tournament.

“As everyone saw yesterday I have been suffering from pain in the abdominal and something was not OK there. That is confirmed, I have a tear in the muscle and the communication is too late.

“I was thinking the whole day I was thinking about the decision to make but I think it doesn’t make sense to go, even if I try throughout my career to keep going. It is very tough circumstances but it is obvious if I keep going the injury will be worse and worse.”

Spanish professional tennis player is currently ranked world No. 4 in singles by the Association of Tennis Professionals.

Nadal has been ranked world No. 1 for 209 weeks and has finished as the year-end No. 1 five times.