Pushing Seth Rollins To The Limit…. 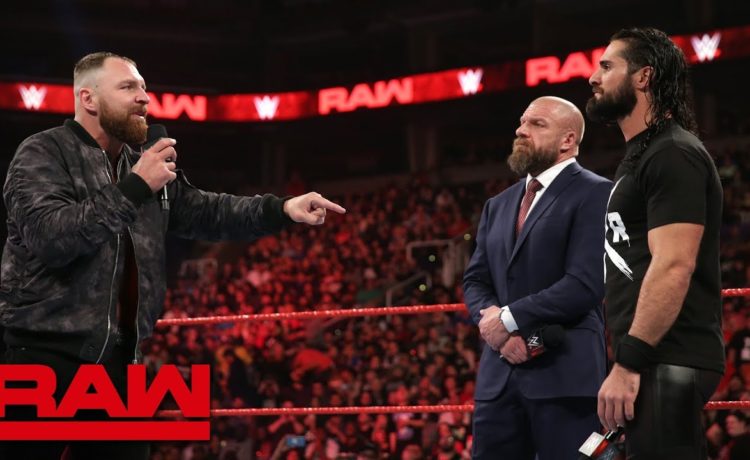 Kicking of the show with-BURNN IT DOOWWNN- the baby face Seth Rollins. Stating that it is hard to make the decision for the match on Wrestlemania. Then suddenly The Game Triple H came to congratulate Rollin for winning Royal Rumble Match. Dean Ambrose interrupt H and Rollins for no actually reason which leads to the first match of the night between Rollins and Ambrose.

A brutal war of attrition followed, but by the time that Rollins could land a Stomp on the head of Ambrose, it was all over for the Lunatic Fringe.

This match was good only because of Alexa Bliss <3. She returned from the injury she had in September against Ronda. The match ended in double Samoan drop from Nia Jax to Alexa and Mickie. Nia and Tamina won the match and qualifies for the WWE Women’s Tag Team Championship Elimination Chamber Match.

I don’t know why they are keep booking Kurt Angle in matches. He is DONE. Baron perform DeepSix on Kurt and pinned him adding some extra insult to injury when he administered the End of Days after the bell had rung.

Finn Balor enter the ring to confront the WWE Universe but interrupted by The All Mighty Bobby Lashley. He beat the hell crap out of Finn. Looks like the title is on the line and a buildup for Wrestlemania.

Curt Hawkins and Zack Ryder may be back on RAW as a team, but they were no match for the tag team specialists known as the Revival, as Dawson and Dash ran circles around the duo and applied their trademark Shatter Machine to win this bout in a decisive manner.

I have no idea what’s going on in this feud, but what I do know is that seeing a guitar get broken over somebody’s spine never gets old.

It was a good match.

The match was good Bayley performed really good. Right after Ronda finished her business with Bayley Becky Lynch enter in the ring and confront Ronda. The Man had made up her mind: As the woman’s Royal Rumble winner, she was ready to challenge Rousey for her position as the top dog in the WWE.

The was going good, going great but what began as a test of strength between two of RAW’s biggest monsters, quickly became a beatdown as Baron Corbin’s arrival saw the DQ bell rung in Strowman’s favor.

Rollins made up his mind as he decided to chase after Brock Lesnar and answer him with his fists. Rollins may have got an early lead on Lesnar, but the kingslayer wasn’t prepared for the sheer brutality of the champ. Seth got 6 Beautiful F-5s. Lesnar accepted Rollins and his challenge for the showcase of the immortals.