Mohammad Rizwan is the new No.1 at the ICC Men's T20I Player Rankings for batters 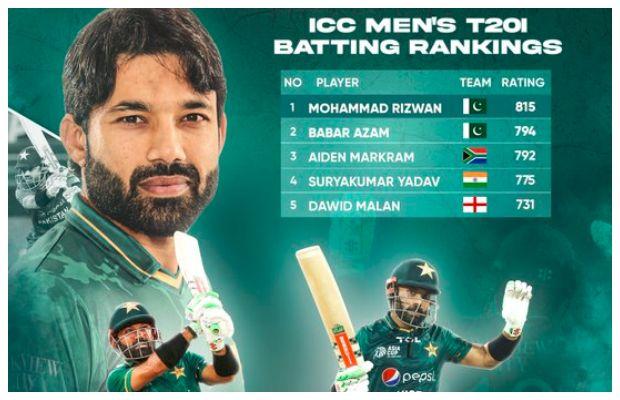 Mohammad Rizwan has finally broken Babar Azam’s 1,000-day streak of staying at the top of the T20I ranking!

In the latest rankings released by the ICC, Pakistan’s Mohammad Rizwan has moved to the top spot,

Rizwan has gained 815 points, up 19 points, after his undeterred performance in the ongoing Asia Cup 2022.

Rizwan has emerged as the top run-scorer in the Asia Cup so far with 192 runs, including two fifties in three matches.

The Pakistan opener hit the fifties against Hong Kong and India, and also made 43 in the first game against arch-rivals India in the tournament.

Meanwhile, Babar Azam is now a number below his teammate Mohammad Rizwan having 794 points.

Babar Azam had been holding the number 1 spot for 1,155 days in his career (as of 7 September), but his long-lasting reign ended after a comparatively out-of-form performance during the Asia Cup.

South Africa’s Aiden Markram is in the third spot with 775 points. 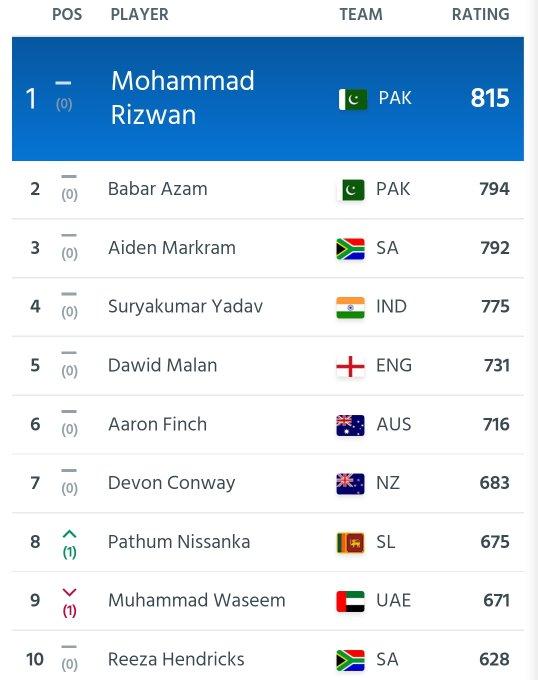 tweet
Share on FacebookShare on TwitterShare on PinterestShare on Reddit
Saman SiddiquiSeptember 7, 2022
the authorSaman Siddiqui
Saman Siddiqui, A freelance journalist with a Master’s Degree in Mass Communication and MS in Peace and Conflict Studies. Associated with the media industry since 2006. Experience in various capacities including Program Host, Researcher, News Producer, Documentary Making, Voice Over, Content Writing Copy Editing, and Blogging, and currently associated with OyeYeah since 2018, working as an Editor.
All posts bySaman Siddiqui