Khushdil Shah, Shahnawaz Dahani, and Usman Qadir have been included as the travelling reserve players. 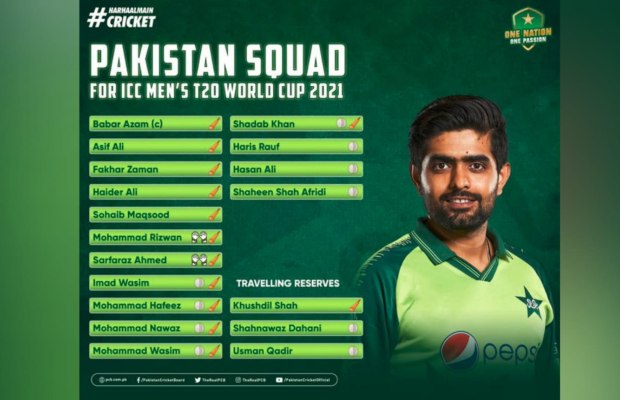 The Pakistan Cricket Board (PCB) on Friday has announced the final squad for the ICC Men’s T20 Cricket World Cup.

Meanwhile, Muhammad Hasnain has been dropped. Khushdil Shah, Shahnawaz Dahani, and Usman Qadir have been included as the travelling reserve players.

As per the PCB announcement, Sarfaraz Ahmed and Haider Ali have replaced Azam Khan and Mohammad Hasnain respectively, while Fakhar Zaman, who was originally named as a travel reserve, has swapped places with Khushdil Shah.

“The decision on Sohaib Maqsood’s inclusion in the squad will be made following medical advice. The top-order batter underwent MRI scans for the lower back after the 6 October National T20 match against Northern and missed Thursday’s Punjab derby against Central Punjab,” PCB added.

Chief selector Muhammad Wasim said: “After reviewing player performances in the highly competitive National T20 and in consultation with the team management, we have decided to include Haider Ali, Fakhar Zaman, and Sarfaraz Ahmed in the squad for the ICC Men’s T20 World Cup 2021.”

tweet
Share on FacebookShare on TwitterShare on PinterestShare on Reddit
Saman SiddiquiOctober 8, 2021
the authorSaman Siddiqui
Saman Siddiqui, A freelance journalist with a Master’s Degree in Mass Communication and MS in Peace and Conflict Studies. Associated with the media industry since 2006. Experience in various capacities including Program Host, Researcher, News Producer, Documentary Making, Voice Over, Content Writing Copy Editing, and Blogging, and currently associated with OyeYeah since 2018, working as an Editor.
All posts bySaman Siddiqui