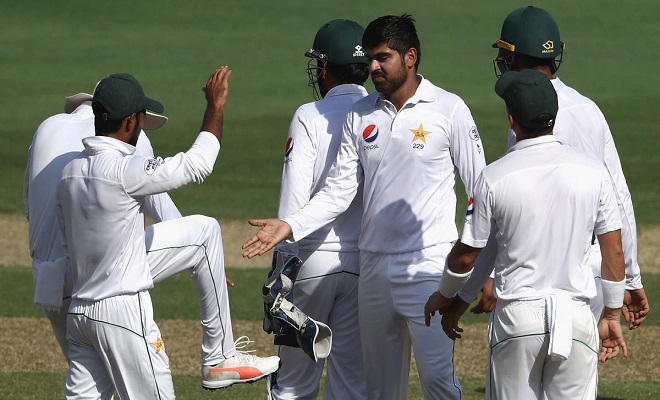 Cricinfo’s stats page shows that Harris Sohail’s control was at 95% during his stay at the crease on a difficult pitch, with light fading this was more than respectable. There were 3 boundaries in his 22, two of them would certainly qualify as work of art. Two straight drives, on through mid-off, one mid-on, just exquisite. However, those wouldn’t be the remarkable achievement of the day for Harris. Rather it was his bowling today that stood out.

New Zealand had setbacks from the start of the innings. Mohammad Abbas’s excellent form continued, while Yasir Shah cashed in on some good work of his bowling partners, as New Zealand looked to break free. But then Captain Kane Williamson and Henry Nicholls settled in and looked fairly in command. Harris Sohail came into bowl 2 overs before lunch. The 2nd ball spun big and it perhaps opened up another avenue for captain Sarfraz. Although it was never easy but we had Ramiz Raja talking how the middle session is easier for batting in UAE. Abbas, however gave the breakthrough and captain wisely bought Harris Sohail back as two right handers were in. Next over Hasan Ali got lucky initially then bowled a beautiful bowl to break the back of New Zealand.

The conventional thing would have been to go back to Yasir Shah. He is the match winner, the superior bowler. But Sarfraz entrusted Harris and boy did he deliver. Getting Ish Sodhi, in what looked a tight but correct call. The ball spun just enough to hit his boot. Soon, Harris became unplayable. Bowling relatively wide of crease, he managed to get one to pitch on leg stump and it would have hit middle or leg stump. It was simply outstanding control over line and spin, with obvious assistance from the pitch.

Pakistani bowlers proved their quality and one hopes batsmen build a solid lead. Batting on this wicket in the 4th innings would be dicey.