Shah entered the bronze medal bout after losing his first round earlier. 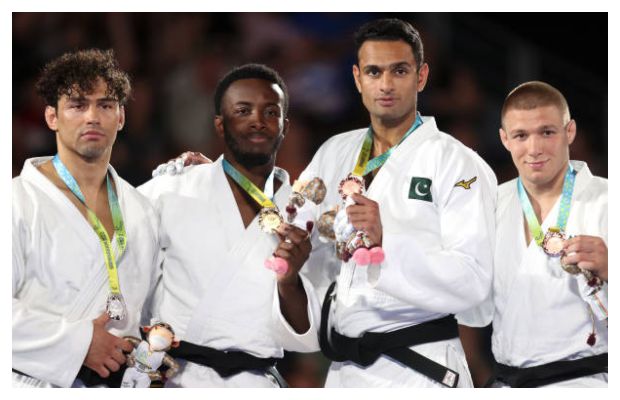 Shah Hussain Shah wins the first medal for Pakistan in the Commonwealth Games 2022 in Birmingham.

Interestingly, this was Shah’s first ever 90kg event as he has always played in the 100kg category.

Shah entered the bronze medal bout after losing his first round earlier.

After initial hiccups, Shah successfully downed his South African opponent Thomas-Laszlo Breytnbach to win the contest on ippon in less than three minutes.

He had earlier won a silver medal in the 2014 edition of the Commonwealth Games in Glasgow.

The 20-year-old is the son of Olympic bronze medalist boxer Hussain Shan.

He has also won two gold medals for Pakistan in the South Asian Games.

Congratulations are in order for the young Pakistani Medalist!

yet another Medal hope Nooh Dastagir Butt will be competing in 109+ Kgs weightlifting shortly.. fingers crossed for one more medal! lets do this!! #CWG2022 #Judo pic.twitter.com/hpRruo3V9y