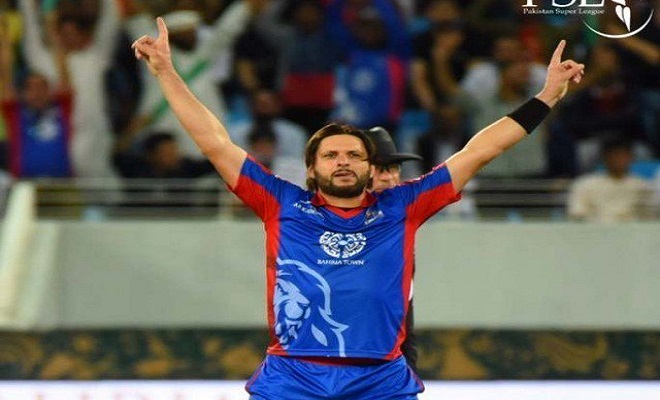 Star all-rounder Shahid Afridi has been released by Karachi Kings as PSL franchises announce retained player names for season 4. Players were allowed to name mentors and ambassadors, which meant they could compensated if they were dropping a category.

The biggest omission came certainly from Karachi Kings as they let go of Shahid Afridi. Mohammad Amir though had better luck was retained in the platinum category. Babar Azam after a stellar year with Pakistan and New Zealand opener Colin Munro were also retained in the same category. Colin Ingram (ambassador), Imad Wasim © and Usman Shinwari were in Diamond category.

Defending Champions, Islamabad United again kept the core of their team by retaining all three Platinum players Luke Ronchi, Shadab Khan, and Faheem Ashraf. Asif Ali and Mohammad Sami made it in the Diamond category. Significantly, Rumman Raees who has been out injured since PSL 3, was picked in the Gold category.

Peshawar Zalmi had a setback when Mohammad Hafeez decided to go back in the draft list. They retained pacer bowling duo of Wahab Riaz and Hassan Ali in their Platinum category. Captain Darren Sammy and Kamran Akmal (Ambassador) are now part of the Diamond roster.

The sixth team or formerly Multan Sultans only retained Shoiab Malik as their Platinum pick and Mohammad was included as ambassador in their Diamond category.

Finally, Lahore Qalandars, also retained only one platinum players Fakhar Zaman, while Yasir Shah was in the Diamond roster.

The PSL draft will take place on 20th November.

Here is the list of the players retained by all 6 PSL franchises.

BREAKING: The PSL Team Retention list for Season Four is revealed. #PSLDraft2018
How many of your favourite stars made the list? pic.twitter.com/onmW8wWuSu