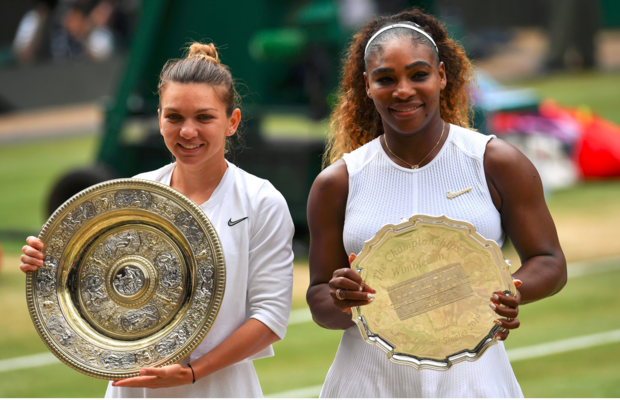 Halep, 27, becomes the first Romanian to ever win Wimbledon and deprive the 37-year-old American of a 24th grand slam title that would have tied Margaret Court for the all-time lead.

Halep stunned her opponent, the Centre Court crowd and almost every Tennis fan to triumph in just 55 minutes of match time, displaying resourceful and so near-flawless.

How did @Simona_Halep win her first #Wimbledon title?@IBM reveal the secrets of her success… pic.twitter.com/lSSdxZFKak

Going to her first Wimbledon final, Halep was ranked world no. 7, while Williams trailed her at no. 11. Williams is a seven-time Wimbledon champion, while the final marked her first at Wimbledon for Halep, who only just won her first major tournament last year at the 2018 French Open.

So many shots to choose from…@HSBC_Sport Play of the Day belongs to @Simona_Halep 💥#Wimbledon pic.twitter.com/vJTAwPFuwF

The Royals were also in attendance to cheer for the ladies single in the final.

The Duchess of Cambridge, @Wimbledon Patron, and The Duchess of Sussex attended the #Wimbledon Ladies’ Singles Final today 🎾 pic.twitter.com/040EblUXZn

Congratulations to @Simona_Halep on a tremendous win. One of the most perfectly executed matches I’ve ever seen. She’s Romania’s first-ever singles champion! Incredible tennis. 🎾#Wimbledon