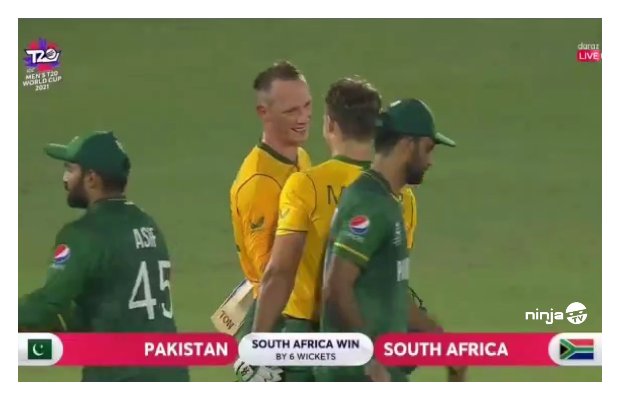 South Africa had won the toss and put Pakistan to bat first.

Batting first, Pakistan posted 186/6 in 20 overs on the scoreboard.

The warm-up match turned out to be an absolute nail-biting contest as South Africa chased down the target in the last ball of the game.

Skipper Babar Azam (15) and wicketkeeper-batsman Mohammad Rizwan (19) — failed to impress with the bat and were sent off the crease within quick intervals.

Mohammad Hafeez (13) was also sent back to the pavilion by Keshav Maharaj in the second-last ball of the 10th over.

While Shoaib Malik and Asif Ali were also dismissed at the loss of 28 and 32 runs.

Pakistani bowlers did not pick up timely wickets to restrict South Africa.

Quinton de Kock (6) and Reeza Hendricks (7) were dismissed in the third over by all-rounder Imad Wasim.

They were replaced by Rassie van der Dussen and Temba Bavuma.

Van der Dussen’s hundred sets up the victory for Proteas against Pakistan.

Pakistan had defeated the West Indies by seven wickets in their first warm-up match on Monday.

Babar Azam-led Pakistan, who will face arch-rivals India in the opening game of their campaign in Dubai on October 24.