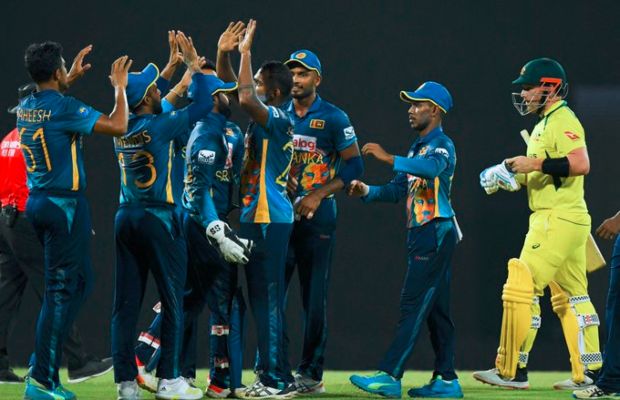 Sri Lanka wins the bilateral ODI series against Australia for the first time after 30 long years at home!

Tuesday night saw Sri Lanka hold their nerves to take an unassailable 3-1 series lead as they beat Australia by 4 runs in the fourth ODI in Colombo.

It turned into a nail-biting contest, after setting Australia a 259-run target, the hosts took wickets at regular intervals until 19 was needed off the last over.

Matthew Kuhnemann made things interesting by hitting three fours in the over to bring down the equation five need off the last ball.

However, Dasun Shanaka dismissed the Australian batter to help his team secure a four-win win.

Australia bowled out the host side for 258 in Tuesday’s fourth ODI match.

Sri Lanka slipped to 34-3 after being put in to bat first.

Glenn Maxwell struck first with his off-spin to get wicketkeeper-batsman Niroshan Dickwella stumped for one in the second over of the innings.

Cummins kept the host side under pressure as he soon sent back Kusal Mendis for 14 and previous match hero Pathum Nissanka fell for 13 off Marsh.

However,  a 101-run partnership between the left-handed Asalanka (110) and Dhananjaya de Silva (60) brought the host team back to a respectable total with a mix of caution and aggression.

tweet
Share on FacebookShare on TwitterShare on PinterestShare on Reddit
Saman SiddiquiJune 22, 2022
the authorSaman Siddiqui
Saman Siddiqui, A freelance journalist with a Master’s Degree in Mass Communication and MS in Peace and Conflict Studies. Associated with the media industry since 2006. Experience in various capacities including Program Host, Researcher, News Producer, Documentary Making, Voice Over, Content Writing Copy Editing, and Blogging, and currently associated with OyeYeah since 2018, working as an Editor.
All posts bySaman Siddiqui