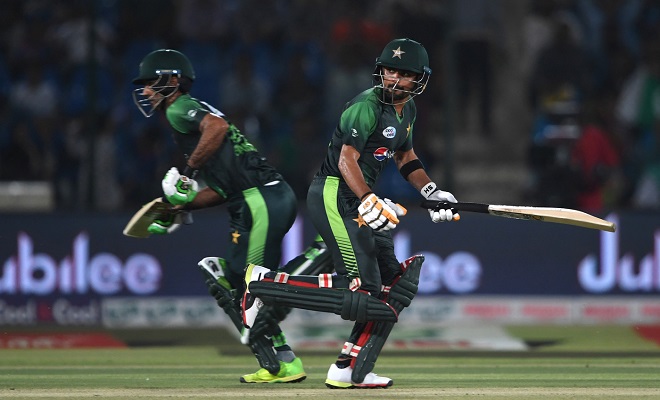 There cannot be two more contrasting approaches to batsmen-ship. Fakhar is all power & belligerence, while Babar is all touch and timing. Fakhar likes to stay leg side of the ball to free his arms. Babar, comes in the line of the ball to play the most exquisite of shots to all directions. For all the talk of resurgence of Shoiab Malik & Mohammad Hafeez, it is Babar Azam and Fakhar Zaman who have improved Pakistan’s fortunate in white ball cricket. Albeit against relatively lower ranked teams. On Friday, Pakistan needed them more than ever.
https://www.oyeyeah.com/sports/sarfraz-ahmed-lead-pakistan-world-cup-2019-ehsan-mani/

Fakhar Zaman has been struggling ever since New Zealand adopted that outside leg stump line. But after initially reigning in a bit, Fakhar went back to his merry way of ferociousness and using the bat as a tool of mass destruction. On the other hand, Babar came in after the sickening blow to Imam ul Haq. Any lesser batsman may have taken the safety 1st approach both in terms of personal safety and for the team as well. But Babar attacked Ferguson and got him of his line. There was cuts and hooks but one cover drive needled through the fielders just caught the eye of everyone. It was sublime shot, which showed how delicate and elegant Babar can be if required.

In the 1st game Ferguson built pressure from one end with rapid bowling and Pakistan got behind the asking rate and never recovered. Imam perished trying to hook him, while Shoiab Malik, Sarfraz Ahmed and Shadab Khan struggled to counter the round the wicket short pitch bowling tactic. Babar and Fakhar, demolished this attack from Ferguson. In 2 and bit overs, he was hit for 5 boundaries and the New Zealand captain had to revert back to his main pacers.

Ferguson, did eventually get the duo but by then the game had drifted. Despite couple of odd dismissals, Pakistan were well on their way to victory. Pakistan have a dismal record in bilateral series deciders for the past decade and half. One of would hope that Babar and Zaman take responsibility and turn the tide for Pakistan.