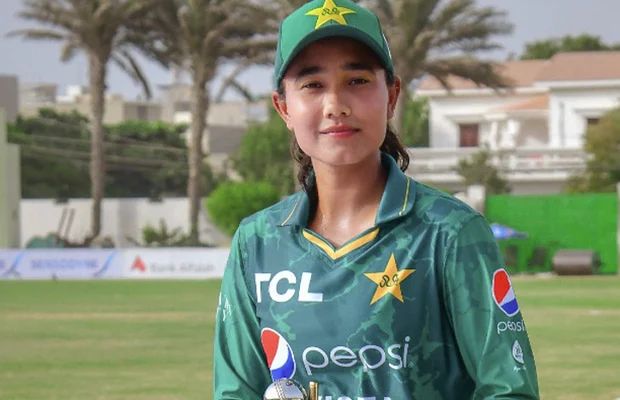 Tuba Hassan has been named ICC Women’s Player of the Month for May 2022.

The International Cricket Council (ICC) has unveiled the names of the cricketers who have won the ICC Player of the Month for May 2022 for men’s and women’s categories on June 13, 2022.

Tuba had a dream debut last month, picking up three wickets in her first T20I against Sri Lanka.

Congratulations @TubaHassan_72 on being named the ICC Women's Player of the Month for May 2022! 🏆👏

She had a dream debut last month, picking up three wickets in her first T20I against Sri Lanka 🙌pic.twitter.com/V9G0pTBSyk

The 21-year-old leg spinner was instrumental in restricting scores set by opponents Sri Lanka in the three-game T20I series in Pakistan, where she was given the Player of the Series award.

Tuba’s magic with the ball was highlighted during her debut international fixture in Karachi, in which she grabbed three for eight to limit the tourists to 106, setting the platform for a six-wicket win.

On the other hand, Angelo Mathews of Sri Lanka won in the men’s category.

tweet
Share on FacebookShare on TwitterShare on PinterestShare on Reddit
Saman SiddiquiJune 13, 2022
the authorSaman Siddiqui
Saman Siddiqui, A freelance journalist with a Master’s Degree in Mass Communication and MS in Peace and Conflict Studies. Associated with the media industry since 2006. Experience in various capacities including Program Host, Researcher, News Producer, Documentary Making, Voice Over, Content Writing Copy Editing, and Blogging, and currently associated with OyeYeah since 2018, working as an Editor.
All posts bySaman Siddiqui